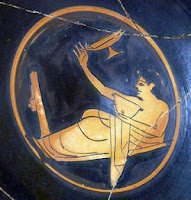 I'm pleased to report that Stay-At-Home Indie Pop (not one of the Ludlow Indy-Popps, I fear) has launched a thoughtful catalogue of people who irritate him by their very act of being.

His first target is a crass fellow "down the gym" (pron. "gime": Simpson's Dictionary and Menu-Reader).

The simple presence of this character at a gymnasium would have propelled him straight into the 110% buffoon category for me, but would also have raised questions as to what Pop was doing at such a grim institution.

There are few acceptable reasons for being "down" a gym, as opposed to taking exercise in a manly way like playing rugby football, pleasuring bored housewives, smearing your face with spoor and stalking ramblers through a thicket, or a combination of the above. Here are some:

As Cavafy might have waned elegaic, Anglo-Saxon culture has taken the best of the Greek Tradition and reduced it to owl-haunted rubble.

To the Ancients the gymnasium was a place where, yes, you could run around and lift heavy objects if you felt the need, but it also invited deep thought and discussion with your fellow citizens.

The topics of debate ranged beyond "I've packed my glutes/hey, feel the pecs on my abs!/I've just burnt something to the max", encompassing as they did politics, arete, agape and who would win in a fight - the minotaur, or the eagle that ate Prometheus's liver?

And, to sharpen the point that there's more to life than tossing a plate around, the Greeks made athletes practice their vile arts naked.

This held the men up to female ridicule and unwarranted attention from middle-aged bachelors, and gave young chaps an idea of which young lady to ask to the agora for a refreshing jug of wine and twigs.

And what about the symposium? For the Greeks, sympotein meant "Your round, son, get 'em in!", and that is exactly what everyone did from Hades to the Hellespont.

If you wanted to talk about the Epiriote Question or how many squaddies you can stick up the arse of a wooden pantomine horse, this is where you would do it - over a bowl or three of Cyprus Sherry.

On the other hand, if you wanted a lewd sing-song about the Queen of Sheba or just to ogle some good-time girls' tonguing a primitive oboe, the symposium was also the place for you.

Turning up at a symposium in Brown's Britain with a bucket of wine, a brace of Moroccan boys and a courtesan to hold your toga is not likely to do your professional reputation much good unless you are a gangster rapper or attend the School of Oriental and African Studies.

More likely a fish-eyed "facilitator" in an Asda suit will ask you first whether you've registered for Image and Signal Processing and Analysis, Calcified Tissues, Regen(e)dering Hierarchies or Start Your Own Nationalised Bank, and second whether you'd leave, please. And not a flute-girl in sight.

We ought to show the Grecians some respect by returning these terms and calling our own debased gymnasia and symposia something more honest, such as "sweat planks" and "bore holes".

"You going to rub your damp buttocks on a sweat plank this afternoon, Justin?" "Cheers mate, but I've got to talk about growing deficit awareness down a bore hole. Fancy some drunken gay sex instead?"

The same goes for kebabs, although the Grand Turk may have had a hand in turning the noble souvlaki of Plato's day (pronounced συβλaκή (süblahké) back then, of course) into the cone of pink impacted knackers we see impaled in gibbets up and down the high streets of modern Albion.

We are all Persians now.

You raise an interesting question, and one which personally I would answer "Definitely the eagle that ate Prometheus's liver, but Perseus could whip both their asses, bor."

As for singgering at naked Greeks, women were banned from watching the Olympics. Ffact, that is.

One suspects that they were allowed at the very first games, but that all the male spectators got fed up with their womenfolk pasing pesonal comments on the competitors wedding tackle rather than listen to their explanations of teh finer points of chariot-racing.

Wise words, Byard, and compassionate too.

One of the poignant consequences of the lack of a Gypsy homeland is that you lot never raise a team for the Olympics, apart from the fellows who tar the running track.

What sport events do you think would benefit most from a Romany role?

"Owl-haunted rubble" is a redolent phrase that describes so much of Brown's Britain.

Sisyphus's stone would always beat the lot of them at the end of the day, Brian.

The Romany team would excel at all (ducking and) diving events.

"Unwarranted attention"; when a beautiful straight boy such as you, Sr Boyo, attracts a middle-aged bachelor, the attention might be unwanted, but surely it is warranted.

"Wine and twigs". A compelling remark on the perfect dreadfulness of Greek wine through the ages. In Homeric times they would put Pramian cheese in it, but now it has no need of such adulteration and is filthy all on its own.

True, Kevin, the owl of Afrasiab is our constant companion. And Gadjo, I see an erudite pub game emerging - The Classical World's Hardest Semi-Legendary Beings. Could be a CH4 programme too.

inky, I'm flattered. Is it the hat that does it for me? I'm fond of some Greek reds, especially Cretan, but then I've drunk industrial spirit and boot polish in my time.

Didn't the Greeks also shave off their body hair and oil their bodies before flexing their muscles? That sort of thing has been shoved into the massage parlour these days.

Interesting point, GB. Many activities once considered normal in Athens are now confined to bath houses, although I'm hoping hemlock and sprung verse are not due for a comeback.

I think we're in with a chance at the 400m track resurfacing, mind.

Hemlock's made a comeback, I think that's what we were drinking at a seminar the other week.

I see you mention Cyprus Sherry, Boyo. You may be mildly diverted to learn that Dr Maroon and I shared a bottle of Emva Cream last week. It is the only drink that I have had to propel from my pursed lips and into my reticule. "Emva" stands for Empire Vatted, FYI.

Gyms. Well, obviously, I have Platinum Membership at that veritable chateau on the A4, you know, just past Hare Hatch, on the right. Do I go here for the static bicycle or the carrot juice enemas? Well. sometimes. Mainly I am to be found spreadeagled on a leatherette table, a cortisone'd masseur palpating my ulna. On Tuesdays from noon 'til four I lie poolside in my Laura Urbinati, not bothering to unstrap my co-axial chronometer, languidly perusing the small ads in the Lancet. I'll save you a place.

Two words Mrs P - Nirvana Spa. Don't let the fact that you have to turn right by the Sainsbury's in Winnersh put you off. I took Mrs Byard there for an anniversary pampering session late last year...

After reading this, Noddy Holder singing "Umma, we're all Persians now" has taken up residence in my head and cannot be evicted.

On the plus side, semi-legendary cryptozoological dancers Pan's People are there with him.

Mrs P, it's a tempting offer. I'll bring along the Journal of the Association of Unlicensed Practioners (Bruges), still edited by the crepuscular Conrad Latto (MD Élisabethville).

Andrew, you've conjured up a vision of the Xmas surprise hit, 2009. Pan's People must be getting on now, mind.

Ooh! Ooh! I met a Pan's Person once, Flick Colby, the choreographer. We were all "Darling, mwaah, mwaah, darling." God, I felt so famous.

Being a member of our local sports club, I occasionally drop in, look into the gym, then waddle back to my tent and lie down to recover from the effort of it all.

Two things, no three things.
Cyprus Sherry or Empire Vatted for the pedants, is still worth laying down for a year or two and is most reasonable at £24 for a half case. Ask for it by name; Emva.

What on earth is wrong with gigantic cake factories? They do more good than harm. Let's hear it for UB! They should be raised among the highest in the land.

And thirdly, I have replied to your stout defence agin the sanctimonious on my humble organ. Much appreciated. I cannot tell you.

Inky, you are positively Pouncerian in your encounters with the people who made 1970s Britain what it was. It is a privilege to have you on my blog.

MC, correct form is to change into expensive sports wear - I affect cricket whites - and sit in the juice bar with a hip flask and a wink.

Speaking as an Anglo-Saxon I quite like to have some owls haunting my rubble. Speaking as a Slav I prefer them roasted in paprika and washed down with a nice glass of horilka.

Andrew, you are a connoisseur of cuisine, firewater, wildfowl and masonry. As such I welcome you to the world of my blog.