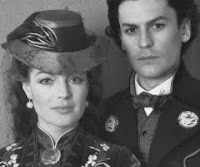 They got turned on by your impersonation of Foot? That is seriously weird. Dennis Skinner I could have understood, but Foot? You should have offered them a bit of Kinnock after 1983, he was real working-class Welsh.

The woman who fancied Neilo married him, GB.

As for Skinner, he would have played a part in one of my other alternative careers:

Noble but brief seems to the phrase in which to deduce level of regret.

Margaret Thatcher never fails to reminds me of poached egg on bovril toast on account of it being her favourite snack. Or so my gran told me in 1985.

That has the ring of truth about it. Inedible muck, and not enough of it.

A Foot win in 1983 would certainly have added to the gaiety of the nations. A highlight would have been Comecon's rejection of his bid for Britain to join. "No thanks. Have you considered signing up for Yugoslavia? They like cooperatives and shit."

One is tempted to say that this, like so many things written by professional journalists, is beautifully crafted but with no basis whatsoever in fact.

However, I have previously heard rumours of a sordid affair involving Ms May walking in stilletos on Boyo's prone body in a BBC corridor from an independent source and dismissed them as mere slander against Boyo's sweet-natured innocence. Now I am wondering whether the whole thing may in fact be true...

I couldn't possibly comment. My legal adviser, the K Man, has made that very clear to me.

And they were kitten heels.

Unknown said...
This comment has been removed by the author.
11:47 am

Well, it's one way of sticking it to the tories, I suppose...

(I used to do a halfway decent Caroline Flint, as it goes - til she threw her rattle out of the pram at the last cabinet re-shuffle. Of course it does mean padding the bra and panties out a bit - she's a *substantial* lass to say the least is our Cazza - but I used to go down a treat with the chaps at the Llanambuwlans Conservative Club. Sorry - typo -that should that read 'on', not with...)

Boyo - curious, since the K-man was my second source.

Berta - wmpfl. Do you make a habit of causing AWS in hapless middle-aged blokes?

If Caroline doubled her "f" count to "Fflint", we Welsh would make her a county in her own right.

As an aside Sir woulld really appreciate your wisdom on the background to the Staffordshire Hoard. Any explanation satisfactory to Welsh national honour (Llywarch Hen, Cynddylan etc) would do. As long as it's funny.

It's an old line from Blackadder, but I have to admire your balls, Boyo. As most of the Home Counties seems to have.

Phoar, Tory girls who pretend to like it rough, eh? Trouble is they is trouble: as their trophy prole boyfriend you're expected you to not wash your hair, smoke crap ciggies and insult their dad.... like it mattered. Can you do Stafford Cripps?

Three Dewis Three - I'll get onto it. I know what MR James would have said.

MC, as a Marxist I believe literally in sharing the wealth.

And Gadjo, these ladies weren't looking for a prole. They have gardeners for that. They were the exception that proves PJ O'Rourke's rule about no one wanted to be tied up and ravished by someone dressed as a liberal. They wanted some hot Hampstead aXXXion.

You were sloppy seconds, Boyo. Philip Snowden already had a booking.

Viscount Snowden - grotesque and ridiculous, as the French press had it.

Now he really was old skool.

I live withing firebombing distance (it'll happen soon, it's that kinda neighbourhood) of both a Labour and Conservative club. The socialists, passim, limp on, but friends in the local drinkery tell me it's a close thing - 'no-one even goes for the bingo' - this despite dead cheap Brain's lurch juice.

The Conservative club is no more, it has ceased to be etc, it's rather picturesque in its decrepitude and will soon be squatted by escapees from the local brothel.

I've never been a bit of rough - I'm rather genteel, truth be told - but did once dally with a young lady who appeared in Burke's peerage, who was rather delighted by my exotic views on nationalisation, wanting to visit Russia and so on.

There ain't no action like Hampstead action - isn't that one of Shaky's (a true-born Elyist) finest?

hey ..
I am looking for making the world united blogger as the best world wide blog that
collect more than 250 bloggers from more than 70 counties , different languages , races , religion but w share the same earth ..
our aim to be 500 bloggers from 100 counties soon ..
join make this earth live in peace

send a mail to
sharm_lover@hotmail.com
( with your name and country represented by you )

Son, there are so many levels on which you have come to the wrong blog.

I liked Micheal Foot. There, I've said it.
And it's funny, but I also had a thing about posh blokes and made up all sorts of excuses for myself.
Sx

Ladies, get me a Wendy James wig and Gyppo's cummerbund and I'm at your service.