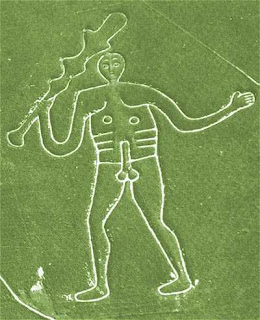 The most intense, significant event of the past two weeks has been the situationist spectacle groyned high on the roof of some plutocrat's house in Berkshire.

The parents of drinks-cabinet virtuoso and tyro toff Rory McInnes were so relieved that he hadn't hosted a Facebook party or bequeathed their patio to Irish tinkers that they failed to notice the mighty male member he had ordered their Filipino maids to chalk on the ancestral tiles in a mixture of bat guano and the tears of homesickness.

At our McInnes Festschrift down the Tethered Goat, the Dog of Deceit (and Hypocrisy) pointed out that young Rory had revealed his objectively bourgeois origins by omitting the three droplets that ought to arch from the tip of the glans towards infinity. These are the mark of the true proletarian artiste du lavabo, as seen on the walls of gents' toilets throughout these United Kingdoms.

As ever, I wondered how this anarcho-syndicalist indulgence could be put to raising true class consciousness among the workers, scythe-making peasants and progressively-inclinded graphic artists of Britain, once they've come back from entertaining London tourists during the G20 summit this week.

And the reply was soon in coming. The Cymru Rouge has been planning to field candidates in England at the next Westminster elections. We have gradually come to realize that Welsh independence, slate-based autarky and compulsory leek-docking for the English among the Pembrokeshire paddy fields are policies unlikely to put us much further ahead than the Liberal Democrats.

And so I have distilled our entire England manifesto into one, poll-storming pledge:

If you vote Rouge, our government will act swiftly to carve three droplets of finest, hop-green piss flying out of the eye of the Cerne Abbas Giant's morning glory.

This will literally cement Saxon workers' hegemony over the cultural sacra of the Norman feudal elite.

We shall then disband, our work here done. Next week, Scotland.

You know it makes sense.

Endorsing the giant's decadent behaviour is ideological deviation from Pottism, unless they're making the point that the ejaculatory power of the Welshman is second to none, which is something I've never doubted.

Indeed, GB, the explanation for our survival in the shadow of such egregious neighbours lies in the potent trajectory of our love ammo. And there's nothing decadent about that.

Well, you could do the Cerne Abbas thing and also give away free Smeg kitchen appliances. Now this makes more sense.
Sx

I can never look at the giant without seeing a cartoon image of Clement Freud.

It takes me two or three goes to spot the member.

(I'm sorry I wrote that: it's brought back memories of an unhappy romantic liaison)

I wish to stand for election in the constituency of Lewisham East, under the name "Ffransis ab Ioan yr Olaf".

As parliamentary member for said constituency, I would ban the Catford chavs from showing their arse cracks in public, and deal once and for all with the epidemic of fried chicken shops that threatens to decimate this once great borough's population within a generation.

What I can't understand is why the giant was given such a proportionally small phallus?

Scarlet, gents, your unconditional support for our programme shows that the Cymru Rouge have a chance of beating Labour into second place in 2010, and that can only be a good thing even for them.

Simon, you win this year's award in the Most Welshest Comment Ever category. Llongyfarchiadau!

Francis, it's hard to imagine a more populist platform for the burghers of Catford (shortly to be renamed Sedgemorsk). You will explain to them that working with a gun in their back for a bowl of slate a day is a picquant cultural exchange.

Kevin, it's the other Freud you ought to be consulting.

Can I stand for the Cymru Rouge over her in Transylvania? We'd have to play down the rouge aspect of course, but they'd go for the cymru simply because it ends it "u" (as in, errr, Ceauşescu, etc).

There's actually very few graffiti knobs around London village, and believe me, I've looked. In the meantime you may be interested to join http://www.flickr.com/groups/graffitiknobs/

Gadjo, you are welcome to set up our Balkan branch. Ţara Galilor awaits the tithes you will be collecting from the locals' veins.

Ellis, you have catalogued yet another sign of England's decadence. It's a sad day when you can't compare your own equipment with the artist's ideal while sluicing the Thames's tributaries with your vin du matin. Thanks for the Flickr tip, it'll make a change from /groups/asianthighboots/

Weird... I've just been looking at graffiti knobs in Platform magazine. Large knobs are getting common.
Communal kitchens - are you nuts?!!!!
Sx

Scarlet, I am a Welsh Maoist who lives in Berkshire. Yes, I am, to put it mildly, nuts.

I used to travel to Cambridge a lot and was very disappointed by the public toilet graffiti there, a city with a university that prides itself on being the world's nexus of top-drawer education and homosexuality. There was merely a small drawing of a knob and a telephone number - although on closer inspection it turned out to be no ordinary number but the Fibonacci sequence.

Like the Durruti Column, the Fibonacci Sequence is just a great name for a band, whatever it might have been in reality.

I beg to differ. A true anarcho-syndicalist member would have been tattooed by a suitable slogan, matching its length.

From "Hurray!" to "We'll give a crushing response to the enemies of the world proletariat".

... while promoting peace throughout the developing world" will fit down the other side neatly. Or on the same side if you're in the Rouge.

Apropos, Snoop, we're thinking of opening a branch in Israel. It strikes us that what Ha'aretz needs is non-religious-based fanaticism, just for a change. Fancy being Akh Ha-Rishon?

I note when clicking on the label 'big cocks' which adorns the base of this post that this is your only offering thus far on the subject.

What on earth is this blog coming to?

Yours in support of CR
Greg

Anonymous said...
This comment has been removed by a blog administrator.
6:45 am

Anonymous said...
This comment has been removed by a blog administrator.
9:39 am

It is compelling to pore over this theory and parade of its appendix in gambling.
That I be familiar with less it - it concerns statistics, is applied to the decision of the nonlinear equations.
Vastly much the clarification to the facer decision (as far as something farm now anybody so plainly expound nothing a smog) interests:
There is a teleshow - the virtuoso and the leader.
There are three doors. Behind joke of them the windfall, behind two others is not present.
The chief offers a choice to the gamester that conformably chooses any of 3 doors (their probabilities are equal).
After the realm of possibilities is made, the principal who knows where lies a trophy, opens joined of those doors that are not chosen by the virtuoso and shows that there the prize is not present. Also suggests the participant to determine aeons ago again already between 2 doors.
Query - how to arrive to the player? (In a outset it is specified that it is needed to substitute a selection, the expectation of a receipts behind a door on which was specified by the actor who is doing not direction = 66.7 %.
Altogether much I mark time against councils or at least references where to look.
Representing more intersting look http://www.obu.edu/centers/images/index.html

Anonymous said...
This comment has been removed by a blog administrator.
2:50 am

missouri car insurance Definitely agree with what you stated. Your explanation was certainly the easiest to understand. I tell you, I usually get irked when folks discuss issues that they plainly do not know about. You managed to hit the nail right on the head and explained out everything without complication. Maybe, people can take a signal. Will likely be back to get more. Thanks Jason - car insurance texas

Anonymous said...
This comment has been removed by a blog administrator.
4:55 pm

Im kind of thinking along the same lines as scarlet blue

We [url=http://www.freecasinobonus.gd]casino games[/url] obtain a large library of absolutely unconditional casino games for you to monkey tricks privilege here in your browser. Whether you call for to training a provender encounter scenario or scarcely try elsewhere a occasional new slots once playing for genuine in dough, we procure you covered. These are the exacting uniform games that you can treat cavalierly at veritable online casinos and you can play them all representing free.