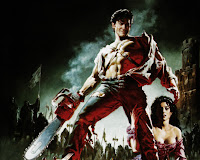 We have an enigmatic German gardener at work. He rambles, Blott-like, through borders both herbaceous and international, dazzling guards and gardenias alike with the light refracted freestyle from the top of his dome and Mercedes W123.

Was he once a singular faction of the Rote Armee Fraktion? He remains as shtum as Stammheim at any mention of Leila Khaled, but deemed Danny the Headhunter from Withnail & I to be a "man with much wisdom concerning hair" after I'd loaned him the DVD.

He disappeared recently, only to return to the Tethered Goat last week. Our liquid luncheon party thought he'd been to Scotland, which is very pleasant this time of year. Instead, he assured us, he'd been on a chainsaw course at Wellington College.

We squeaked in emasculated awe. Short of attending a seminar on throwing bags of hammers at a wall, I cannot imagine anything butcher.

"Ja, I have learnt much more English," noted Der Uli. "Fuck off out of here! Every word there was fuck this and that," he added.

We explained that this is not the sort of language one uses in front of our elegant and exacting barmaid. Der Uli looked as if we'd recommended an Autobahn speed limit. "This was not correct?"

We elaborated that a proper register in the chainsaw-wielding community might not chime with the drunk-hosing sorority. We encouraged him to try out his new lexicon elsewhere, noting in particular that Reading night-club bouncers appreciate a midnight shove on the shoulder accompanied by a cheery "Fuck off out of here".

This exchange got me thinking about many issues of public concern. The Breaking of Andrew Sachs, the Exposition of Captain Jack Barrowman, the Resignation of Sir Terry Wogan - it all adds up to a Britain ill-adjusted to brandy-baffled gentlefolk and their 45 rpm needs.

With this in mind, Gyppo Byard and I have decided to launch a campaign to teach youngsters like Sachs, Wogan and the BBC the art of self-restraint. Too long have we allowed unbelted youth hegemony over our airwaves and watering holes.
At moments like this, Madame Boyo and I like to ask what Gramsci would have done. "The old is dying and the new cannot be born; in this interregnum a great variety of morbid symptoms appear," was how the Sardinian dwarf put it to his cellmate Il Stronzone. Morbidity is a Welsh national characteristic, so the dialectic chose right once again.

Careless readers will know that this blog supports rap music, in both its hip and hop varieties, as well as diverse "skools". I therefore propose adapting this genre because of its singular ability to appeal to young and old alike.

My rapper of choice is, of course, Schoolly D. The banning of his "Signifying Rapper" by Page & Plant out of Led Zeppelin is one of the most egregious acts of cultural vandalism of our tarnished times, ranking alongside Classics FM and the Taliban destruction of the Bamian Buddhas.

The Devil repaid his debt to Robert Johnson by giving Jimmy Page the features of Norman Lamont, while Jermyn St is clearly continuing to boycott Robert Plant. In the meantime, some stout heart has risked the Wrath of Crowley by posting Mr D's finest moment on YouTube, where I urge you to check it one time:

But it doesn't really speak to the wearers of tweed and nutria, unless they use these materials as underwear or to upholster their Cotswold "cribs". Instead, why doesn't Schoolly drop the ostinato from "Kashmir" in favour of, say, the opening minutes of Eric Coates's London Bridge March, as heard at 1'45" on this recording?

This splendidly little-known piece is unlikely to bring Schoolly any legal problems, and the interview with Mr Coates himself will give a few pointers as to the desired diction and cut of cloth for Mr D's Home Counties comeback tour.

Now to matters of wording. A study of the middle quatrains of "Signifying Rapper" will soon reveal Schoolly's mastery of New York vernacular and his flair for the picaresque. For those readers without Internet access, allow me to quote:

He said, you know your daddy and he's a faggot
And your mother's a whore
He said he seen you sellin asshole door to door
Yeah that's what he said, listen to what else he said mister badass pimp

He said, your granny, she's a dyke
And your other brother, he's a faggot
And your little sister Loo
She's so low she sucked the dick of a little maggot
Yeah that's what he said.

And I for one do not doubt it. Nonetheless, the London Bridge March time signature requires a more sprightly tempo, and much of the Bronx argot may be lost in Berks. I would recommend something along the lines of:

Your father rather enjoyed his time at Peterhouse,
And your dear mother - how is she, by the way? -
Went to great lengths to get you into Wellington
Where, I gather, you courted easy popularity with the prefects.
I doubt whether your housemaster approves
Of your current employment by an
Involuntary Albanian marriage bureau, either.

Furthermore your grandmother - I forget which -
Spent the late '20s in Berlin,
While your younger brother summers in Morocco,
And your sister Louise, despite her youth,
Already enjoys local renown as an undiscerning fellatrice,
Or so I'm told.

Try it out for yourselves by trilling along to the clip of Coates, either by following the melody or adopting rap's sprung Sprechesang.

It can only help to revive Schoolly D's career, which has flagged since 2000's "Funk 'N Pussy", and might at least improve the demeanour of Britain's notoriously tetchy après-pub masseuses. It is Advent, after all.
Posted by No Good Boyo at 7:01 pm

He was in the place, and indubitably off his face.

Rhyming "maggot" with "faggot" is genius of a Shakespearean calibre. I notice you couldn't find a synonym for "maggot" in your gentrified version.

Both the hip AND hop varieties, you say.
Fabulous.
Pearl

It works, Boyo I've sung those lyrics to Mr Coates' melody whilst striding purposefully around my room with a folded copy of The Times under my arm, and it scans perfectly!

GB, I felt that "undiscerning" covered all of the young woman's other peccadilloes. While Schoolly deploys his mastery of rhyme - Miltonian rather than Shakespearean, in my opinion - I opted for vers libre.

Glad you agree, Gadjo. Sorry to hear you don't have the Telegraph. Surely one of the better hotels in Cluj could oblige.

Pearl, you heard right. In Britain we incline more to "hop", but are no strangers to "hip" in our better moments.

Hmm, I always wondered what happened to that bastard Blott, after Tom Sharpe had had enough of him. Seems he's now resident in your parts (eek!). Must be getting on now, though. Don't he qualify for a pension - not even a military (Red Army Fuckers) one? I do hope you're treating him well. You wouldn't want him to repeat his end-of-novel shenanigans in your garden, would you. Would you?!

Actually, that would be fun. There is a folly-like thing in the grounds into which he could barricade himself...

Der Uli has a nice green uniform, a motorised Launenmowewagen and all the foliage he can eat. Plus there's fish in that lake for the taking.

Why, in the context of Rote Armee, is Fraktion always rendered in English as Faction? And what can be done about this? Maybe in Reading, under the glare of Famille Boyo, this casual mis-copying is tolerated less than elsewhere. I hope so.

Spotty my man, "Fraction" is correct but meaningless outside the world of far-left politics, while "faction" is just incorrect.

Personally I'm happy with "dead-eyed psycho brats". If they'd adopted that name Baader and his java-crazed chums would have become nothing more than a popular band on the East Coast college circuit. Gary Glitter for keffiyeh-bearers.

Perhaps they're better off dead.

Erm.. I think my accent might have spoilt the effect of your lyrics... think Miss Brahms, and you get the picture...
Sx

You do this to torment me, don't you, Eliza?

Or, as a band, they could have called themnselves "Red Army Friction" - kind of arty.

Nice new pic and layout, Boyo! How do I get to become a "strewer of petals"? I still haven't properly worked out this whole "follower" thing.

Thanks Gadjo, the Peel Show would have loved them.

I think you have to upgrade your template. I got a prompt to do so some time ago, and only got round to it yesterday as it required manually reinstalling my links etc.

Once you've done that there should be a line saying "follow this blog" next to the photos. You click on this and are mine forever...

Isn't "Red Army Friction" a sort of rash caused by coarse trouser material? That's what the lass told me, anyway.

Oerr, thanks, but it sounds complicated, will probably have to wait until new year then.

But we're in the world of far left politics, aren't we? Where's the light switch? Fuck, I just stubbed my toe. I do wish Mrs Pouncer wouldn't leave her suitcase in the middle of the room.