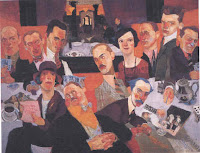 Let's go down to a party
(And I said)
If that's not good enough
Then we'll both end up in
Heartache heartache.

So crooned Paul Haig, late of scowling Scottish songcrows Josef K, before embarking on what for all I know is his current career as an impersonator of Ward Cooper, evil genius of the Genesis album market. The resemblance is canny.

A jolly number, the video of which reminds me of how splendid 1980s tailoring could be, "Never Give Up (Party Party)" had all the ingredients for becoming a hit - not least of which was a title with brackets in it.

This always works. Think of "Get Up (I Feel Like Being a) Sex Machine", "Escape (The Piña Colada Song)" and "I'm The Pope (You Know What I Mean)". MC 900 Ft. Jesus's "Truth Is Out Of Style" could have moved mountains if he'd added some parentheses.

And, on that subject, isn't Your Lord 6 Ft. Blonde Blue-Eyed Jesus about to enjoy His celestial birthday party? How He must delight in the demented diversity with which we mortals join in the celebrations. Poles mark the occasion by adopting a carp and letting it cavort in their bath, if they have one. Tagalogues nail themselves to trees in a sincere form of flattery. Catalans pay homage by naming their yule log after bowel movements.

Here on the feral high streets of Albion we have work Christmas dinners. These epitomise the British devotion to enforced cheer in confined spaces. Paul Haig's equally tuneful compatriot the K Man is a devout Calvinist who will not snub The Creator's yuil, especially if Management is paying, and so he developed a technique for dealing with these horrors at his various place of employment.

"I developed a technique for dealing with these horrors," he bellowed thoughtfully at The Tethered Goat the other day.

"Source a few sociable, chain-smoking bastards like yourself, get pished in a nearby bar, then rock up at the restaurant on time. Your boss and his cronies will already be up one end of the table, so you can grab the other. All the bores who've been parking their cars or hiding from drunks will fill the space between and leave you alone. A triumph for Scotland!"

"I'm looking at an empty glass, by the way," he added.

I nodded in regret at how things can go wrong if you heed not the words of the K Man. My own immediate colleagues, it must be said, are a bateau ivre heaving with wit, poise and beauty, so all of our frequent works outings resemble an En Vogue calendar shoot in Oscar Wilde's drawing room hosted by John Cassavetes.

The same could not be said for one of my previous places of work. There I broke the K Man rule, and ignorance was no defence. I made the common Christmastide mistake of taking pity on a lonely soul. Let us call him Feargal.

This fellow had recently joined our team, and was looking forward to getting to know us better at our Christmas dinner. So all the warning signs of his insane venality were already there, had I the eyes. Like Renfield I escorted this vampire to the '70s sitcom trattoria where the gang had gathered.

Sure enough, Feargal kept me waiting a crucial ten minutes while he knotted his scarf. We then pushed aside the wicker-clad chianti bottles to expose the open leaves of my personal Doomsday Diary.

Two places remained at the table. The first was at the smoky end nearest to us, where a blonde and a brunette were demonstrating their novel resuscitation methods on a bottle of barolo and an International Finance editor amid raucous drumming of pipes on primrose waistcoats.

He was a Green Party councillor, she played the bassoon. I had a feeling they both thought of me during their monthly bout of joyless coupling. Otherwise their chief interests were solidarity with the Castro régime and opposition to smoking and children. Oh yes, and they were Esperantists.

Feargal did not hesitate. He slid betwixt blonde and brunette with a Sid James swerve and cracked open a pack of Major. I couldn't escape. The look the other couple gave me mixed yearning with contempt in a way that only cohabitation has accustomed me to. I sat down, ordered a bottle of grappa and asked them how the Havana Philharmonic's wind section was doing.

I trust you will now run through the checklist as you approach the restaurant doors. How late are you? How drunk are you? How many of you are there? Do you smell of perique soaked in rum? Why not?

You will leave at the end of the evening either with an unlisted phone number smeared in lipstick on your cuffs, or much wiser about Turkish police interrogation methods. In the best of worlds, perhaps both.

In the meantime, enjoy the awkwardness of Paul Haig's performance on "Never Give Up", and ask yourself why the brackets didn't work for him on this occasion. Perhaps he hesitated on the threshold too sober and too long:

I can't see how there was enough room to slide between the blonde and the brunette. You literary types should learn that sometimes only a diagram will suffice.

Blugh. Works Christmas dinners in restaurants. My own rule was always sit with the ancillary staff, not the careerists. Cleaners don't give a monkey's about impressing anybody and you might get your knob groped under the table by Mavis from the warehouse.

Yep, it's His birthday soon Boyo, and Blond will beat Brunette as the Star Wars Franchise and so many others have predicted!

Oh yes, and they were Esperantists.

Ha - this should flush Mrs P out!

Where was I? Oh.. I was distracted by the hair and the clothes... my entire eighties wardrobe walked across the screen...
And Gadj, I once found myself under the table at a Christmas party. I didn't grab a knob, but I did do something to my boss's leg.
Sx

This Feargal was pretty much a shape-shifter when it came to insinuating his way among the ladies, GB. It's something they drink in with their mother's peat.

Gadjo, "Blonde beats Brunette" is the working title for my sequel to "No Escape From Bikini Island". This is a sign of my putting art above personal preference, as I'm firmly in the brunette camp. Sorry, Scarlet.

I think it would take a few artillery pieces to flush Mrs P out of the Wargrave underground.

A "Sid James swerve" - ha! I like this Feargal chap already.

You're giving me painful flashbacks to a Greek restaurant in Soho some 20 Decembers ago where the owners coerced the editorial teams from three of the world's dullest trade magazines into dancing on the table while 'Do They Know It's Christmastime' played over the speakers. Even after all this time I'm squirming like an eel unwittingly trapped between Fatima Whitbread's thighs at the memory. I tried to hide in the bog, but they flushed me out.

Ah, Pop. Worse than enforced cheer is its idiot twin, enforced jollity. Especially "in a good cause".

I can't remember the details but there was an American DJ who reviewed drive-in films in the persona of a Texas hick called Jim Bob or Billy Bob.

He got sacked when he released an African famine charity record with Leatherface and other screen cannibals urging the victims to eat one another.

If you'd belted that one out the evening might have passed more agreeably, even if it had ended in a police cell for your own protection again.

TBH Boyo, all other work Christmas parties are whack compared to any, or all, of the Spectator's, and I was lucky enough to go to several, in the dear days when Mark Amory was still on speakers with me. What wonderful days! And how forgiving were restaurateurs! And how circumspect were the hoteliers! Nowadays everyone wants their pound of flesh. It's to cry.

Thanks Gyppo, that's the man. I used to have his book of film reviews. Must find.

Clarissa, welcome back! The Spectator is one of my favourite British institutions, although it still trails far behind yourself.

Drunk has nothing to do with it. Life is about haircuts.
Mine is 3 months overdue.

Merry thingy to you and the lady wife, Boyo.

wonderful issues altogether, you just gained a new reader.
What could you recommend in regards to your publish that you simply made some days in the past?

This is very interesting, You are a very skilled blogger.
I've joined your rss feed and look forward to seeking more of your great post. Also, I have shared your site in my social networks!

Feel free to visit my weblog ... Abercrombie and Fitch

I like the valuable information you provide on your articles.
I'll bookmark your weblog and test once more right here frequently. I'm relatively certain I will be told many
new stuff right here! Best of luck for the following!

Somebody essentially assist to make significantly articles I might
state. This is the first time I frequented your website page and so far?

I surprised with the analysis you made to create this particular post extraordinary.
Great process!

I think this is among the most significant info for me.

And i am glad reading your article. But should remark on few general things,
The site style is wonderful, the articles is really nice :
D. Good job, cheers

Feel free to surf to my homepage Visit Website

I will right away grasp your rss feed as I can not to find your e-mail subscription link or e-newsletter service.
Do you have any? Kindly permit me know in order that I
could subscribe. Thanks.

Fantastic items from you, man. I've remember your stuff previous to and you're just
too great. I really like what you've received right here, really like what you are saying and the way in which by which you assert it. You make it enjoyable and you still care for to keep it wise. I can't
wait to read far more from you. That is really a terrific web site.

It's an awesome article in favor of all the online visitors; they will take benefit from it I am sure.

Someone essentially help to make severely articles I'd state. That is the first time I frequented your website page and up to now? I surprised with the analysis you made to make this actual publish incredible. Fantastic process!

Hello, Neat post. There is a problem with your site in internet explorer, might test this?
IE nonetheless is the marketplace leader and a good element of people will leave out your wonderful writing due to this problem.

You are so cool! I don't suppose I've truly read something like
that before. So wonderful to find another person with some unique thoughts on this
subject matter. Really.. thank you for starting this up.
This web site is something that is needed on the internet,
someone with a bit of originality!

It is really a nice and helpful piece of info.
I am glad that you simply shared this useful information with us.
Please keep us up to date like this. Thanks for sharing.