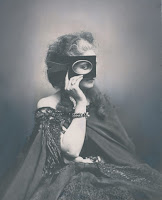 For everyone there is a mirage of cheated desire that beckons across the Gobi wastes of current domesticity.
For some it's the backward glance of a girl as she left a student party on, or in Wales under, the arm of some lunk. For others it's the trace of her perfume, her cigarette or a splash of her favourite cider on your lap.
For me it's a family sack of Maltesers and a roomful of bearded nuns.
The English are masters of enforced jollity, and audience participation is its most vicious form. It bookends their lives from pantomine to wedding discos, and reaches an anguished acme in the singalong film phenomenon - a Basingstoke ballo in maschera barking at a cinema near you.
I think you know what I mean. The "Rocky Horror Picture Show" is one thing, a crowd of strange men in suspenders and make-up belting out "The Time Warp" in your local shopping precinct is another.

To be fair, "Rocky Horror" receives the Boyo imprimatur if only because buxom ladies can be counted on to cram themselves into their younger sisters' basques for the evening.

There is, however, little for the hetero lech to enjoy in "Singalongasoundofmusic", what with its arch Baron and lonely goatherds all yodelling away like bald dachshunds.
I attended such an Alpenfest at the Reading Hexagon some years ago on a Cymru Rouge cultural alienation course. My companions were Sioba Siencyn, Bob Friog and the latter's trainee odalisque Becky.
We are graduates, we read Sontag, we relish the coy outré, but we still hadn't achieved the necessary poise to take this collision of Berkshire Gay Pride's moustachioed nun and knickerbocker factions in our velveteen stride.
The same applied to the dozen Henley parents who'd brought little Jake and Annabel along for a wholesome afternoon of Julie Andrews. They found themselves Von Trapped between the Sisters of Perpetual Indulgence and the gummiknabe.de subscription list, all leering their way through "My Favourite Things" with a variety of Hunnish gestures.
The audience was 97% kinky, 2.9% shocked shiresfolk and 0.1% detatched sophisticates such as ourselves. We settled down to enjoy the irony both onscreen and off.
As in all of these singalongs the high priests of the camp cargo cult had allocated each of us a bag of totems and fetishes to lob at the film like perverted Pavlovian poodles whenever a key word like "wedding", "Nazi" or "Baroness" was mentioned.
Now, my "Sound of Music" moment of truth is that I have always liked the elegant Viennese Baroness and could never understand why the Captain dropped her for that guitar-mauling drab Maria.
I imagine the discalced nun would spend her wedding night squeaking "Gesumaria!"with her nightie and rosary wound round her throat, whereas the Divine Elsa would swing upside down from the chandelier in a cat's cradle of garter belts and saddlewear and set the church bells a-pealing three valleys away with her bel canto bellows of carnal blasphemy.
I admit that the plot of the film would have been different ("Von Trapps stay in Austria, dispatch ghastly children to boarding school, maintain dignity by not plaguing world with song, emerge from War with estate intact, go on to play worthy role in the local Österreichische Volkspartei"), but the sheer venom and shower of projectiles directed at poor Elsa by the cabal of unconvincing Carmelites around me was too much.
During the interval our party assembled for light refreshments at the bar, and Becky hoofed off in search of chocolate. "You'll be lucky," I remarked. "Unless the Hexagon has misjudged its audience, the kiosks will be stuffed with poppers and edible crucifices."
I was setting out my views on the Baroness at appropriate, lubricious length, as received with polite contempt by my Mariolatric colleagues, when I sensed the air stir behind me.
Even with my back turned I could tell she was a blonde. Slender in tweed for the Venetian market, freshwater pearls and campari passant, buoyed by an undertow of Shalimar and righted by an almost accurate dash of Hydra Lustre, she was a feast of South Oxfordshire feudal foxiness.
"I quite agree," she chirped in the eager tones of a lady imbiber who'd laid off the sauce for some serious man-pulling. "She's hard done by, the Baroness. I mean, compare their hair alone - "
Our guest's own hair was Jane Asher after a fight at the Liberty sales, and I was falling rapidly in love. Any woman distracted enough to seek straight adult fun at the largest gathering of inverts in the Thames Valley might just be The One for me.

I imagined our cottage outside Shiplake, weekend lunches at The Plowden Arms, Elgar on 78s, boar-sticking with her father ("Brought my own over from the Auvergne, no fight in th'local porkers"), exemption from speed limits ("Told th'magistrate it dates back to the Normans") and waking in a tangle of bed sheets, Pimm's and harnesses. Oh yes.

I was about to suggest that, as the only unattached heterosexuals in a quarter-mile radius, we should explore our compatibility further in the snug of The Hobgoblin public house, when Becky came crashing through a gaggle of mascara'd novices, a jumbo bag of Maltesers held aloft in her dimpled hand.

"Boyo, Boyo, look what I've got, and I had to fight off two men in gingham and pigtails for it! There's enough for both of us -"

And lo! my Nettlebed nymph had fled among the habits and hosen.

My legal advisor The K Man points out that I am, of course, happily in thrall to Mrs Boyo and no longer entertain thoughts of other women, real or imaginary.

Nonetheless, a trace of Guerlain and angostura bitters can still summon a happy vision of sloshed ladies cantering down country lanes. But then comes the chorus of stevedores in wimples singing "Climb Every Mountain", and the reverie is lost in a puff of amyl nitrate.
Posted by No Good Boyo at 11:12 am

Well, well, well. There are only two of us, you know, and we try not to turn up at the same performances. I usually wear a Hermes suit, bought by Mutti in '65 but still fab, my Pierre Hardy heels and Guerlain's Insolence. Naturally, I am forced to use a blonde wig, but I still look like Haifa's own Tippi Hedren.
She has no need for a hairpiece and is generally dressed in Allegri. We are near neighbours. Oft-times, as I stand toying with a Tanqueray and tonic in the foyer, I am playfully barracked by groups of matrons clad as Brown Paper Packages Tied Up With String, but I smile tolerantly. Noblesse oblige. "What did the Captain ever see in you?" shrieked a Needle Pulling Thread as we queued at the Corn Exchange, Newbury. "Apart from charm, elegance, wit and grace?" I countered, smilingly. Sometimes I pal up with an Oberstleutnant who's looking for a bit of Fernaufklarungs, but I usually maintain a frigid dignity and sing along shrilly, and not quite on the note.
Last month, I appeared at South Hill Park, Bracknell. I can be seen several times during April and May. Book early to avoid disappointment.

I might have known it was part of perfumed pack of peris...

Fuck. Mrs P got in first.

[Pull yourself together Inkspot.] I would point out that a nun with her nightie around her throat is in a position where someone is enviable.

Isn't there a slight problem here in that it's a true story, albeit one that was somewhat embellished by Messrs Rogers & Hammerstein?

I think Rogers and Hammerstein would do a bang up job of putting Boyo's blog to music.

They might have to go soft on the violins, though.

Top fantasy - and more wholesome than that gaggle of spoilt-bastard Austrian kids and singing nuns. And "Jane Asher after a fight at the Liberty sales", mmmmmmmmmm.

She couldn't have been a true blue-blood if a Welsh girl with a bag of Maltesers caused her to flee. Or maybe she was just doing a bit of prick-teasing, you being the prick.

Gadjo, Ellis - thanks for your kind words!

Mr Regis, one of the many frustrations I face in my life is the refusal of history to fall in with my wishes. See also Welsh Independence, Gail Trimble's lap-dancing career and singing monkeys.

Inky, you're a court case waiting to happen.

Francis, I returned to my billet and drank heavily for a change.

Kev - "Boyo! The Musical" is going to happen one of these days. I'm hoping Einstürzende Neubauten will do the music.

GB, there was no fight in her, and Becky was an impressive sight under full sail.

I love The Sound of Music, but I can never help but wonder: Was the lonely goatherd in the Zell am See branch of the Hitler Youth? Just for the socials, like.

Mrs P, there are at least THREE Baronesses in the Thames Valley, I am related to one of them. That could have well been Vera Slapp who enchanted Boyo with her fog, her amphetamines and her pearls. It's not ALWAYS about you, you know. A nice Jewish girl like you dressing up as a Nazi sympathizer - I'm surprised they let you back into Golders Green.

Boyo, now the political wind has turned I'd try and make more of an effort to fit in with the great unwashed, or you'll be sent off to work on a reeducation farm and made to watch ITV.

Pop old man, I'm sure his trade was considered suitably völkisch for the local Nazis. They doubtless had ideas for how to pass the time with country boys in shorts, too.

Daphne, I'm counting on the Return of the Etonians next year to save us from belt-wearing types. And I have to disagree - it is usually about Mrs Pouncer, isn't it?