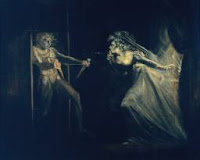 Iron Chancellor Otto von Bismarck said "Politics is the art of the possible". Irn-Bru Chancellor Gordon Brown must interpret this as meaning "Do what thou Wilt", as he has nudged Dads' Favourite Caroline Flint mewling through the Cabinet catflap and settled Glenys Kinnock in her silken basket as Minister of Europe.

This means I need to issue some urgent clarification. Readers of this web blog may have noticed that I have:

This is, as Mrs Boyo says of me, both unfortunate and true. When Glen was just another moule-munching Euromoloch I neither knew nor cared what she thought, but her recent promotion and return to these pebble-dashed isles has caused a ripple of concern to coast across the smooth surface of my brain. The way I see it is this:

So what sort of power could the Minister of Europe have over my holiday plans? Mrs Boyo had rather set her hand-crafted heart on retracing the Molotov Line, what with the anniversary this year, and we don't want to be turned back at Calais by order of the Holyhead Hydra - especially with the boot of the car full of Mrs B's mine-laying maps and Pole-detectors.

I would therefore propose to Lady Kinnock a hudna - the kind of ceasefire favoured by Hamas. The Cymru Rouge pledges not to refer to her manifest evil or idiot family very much if she in turn promises not to make us spend the autumn in Berkshire.

She reads The Guardian. She'll appreciate our sincerity.
Posted by No Good Boyo at 2:15 pm

Well, well. I thought the woman was the moll of a has-been, but you're saying she's crept into high office via the House of Nobs? Wasn't she quite a piece of totty in her day?

All Welsh women are hot to trot, GB, so it's statistically likely that even Glenys was puntable. Depends on how much genetic material she got from the interdimensional star-shambler side of the family.

"The Cymru Rouge pledges not to refer to her manifest evil or idiot family very much if she in turn promises not to make us spend the autumn in Berkshire."

I hereby resign my kommisarship in the Rouge.

It's a matter of principle. The Kinnochios should be given no quarter. Under any circumstances.

The Angka Watcyn orders you to reconsider, late Comrade Sedge. Please note that we are proposing a hudna, not a real ceasefire. The insults will continue, and it will somehow all be the fault of the Kinnocks.

OK, I shall withdraw my resignation, but only on a provisional basis. Any further sign of deviationism and you're toast, Boyo.

Looking at the European election results, it would seem that our beloved Cymru has just had the most enormous dump in the lle chwech, missing the pan entirely. And all that blydi Kinnock woman can do is gloat over her integration into the enemy establishment.

How much weapons do you have? Or is it all pitchforks and biliousness?

Encouraging "Trace the Molotov Line" tourism would be great idea. A Ukrainian acqaintance of mine once tried to borrow money from me to develop his Visit the Potemkin Villages tourist enterprise.

"How much weapons do you have? Or is it all pitchforks and biliousness?"

This is the Wales we're talking about: short on weapons, but never wanting for biliousness.

Will Wales have her back now that it's a Tory bastion?

Sedge, you were cruising for a purging - it is summer and we're long overdue, after all - but redeemed yourself with that Red-Guard Left-Hook to the pulpy plexus of Anonymous.

Robster - if that's your real name:

First, it ought to be "How much weapons does you have?".

Second, don't underestimate pitchforks and bile. Mob justice throughout the ages has been based on little else, save some superstition about wearing glasses and keeping yourself to yourself.

Gaw, I wrote the following on an eminent Welsh blog on Saturday -

Brown: Who still votes Labour, and how can we piss the losers off?

Balls: Wales. You give give Kinnock a job - his first ever!

Brown: Get lost; not even I'd put Neil in charge of anything.

Neil and Glenys were known as "The Power and the Glory" in their university days. We Welsh relish making statements that will come back to haunt us.

True, Taff. We abuse words the way our Gaelic cousins abuse the drink.

I hope I'm not going to regret saying that.

'fraid so, goboi. Madame Boyo is Ukrainian, and always wary of being personally reincorporated into the Kresy as the Województwo bojojowe.

Taff, but which was which? And do the anti-Kinnockistas on this blog have the dialectical nous to teach us how to deal with BloJo?