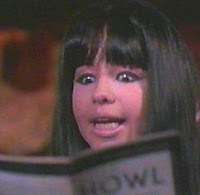 I've lived a long life, blessed with the company of obliging women, two-eyed progeny and a subsidised bar at work. In the course of this life I have been taught many bitter lessons, and have learned nothing from them except this - you do not mess with Buddhists. They will have you every time:

Most recently the hollow-faced drabs and keffiyeh-toting posh boys at The Guardian fell foul of Daw Aung San Suu Kyi, the Iron Lily of the Irrawaddy. What on Earth were they thinking?

Within hours of suggesting that the Burmese were anything but rapt in expectation of her 1,000-year rule, they were steamed and paddled by a phalanx of wall-splitting acrobatic lawyer-monks before they could chant a cheongsam. You just don't screw with The Suu.
An erstwhile colleague of mine had a narrow escape when he tried to string along The Aung many years ago.

His task was to knead some journalistic sense into the slovenly sub-editors on the Far Eastern desk. In their English way they had gone native, and were given to publishing ten-page speeches by Chinese Communist Party officials with no more editorial intervention than a misleading headline. Summaries and subheadings were as alien to their adopted way of life as dairy cuisine and credible film dialogue.
He decided to show them how it should be done by dismembering a piece of Burmese copy before their opium-dimmed eyes. This masterpiece was a 12-page address by some pockmarked psycho to his mates in the military junta to mark Election Abolition Day or something.
The Gang of Twenty-Four had slapped the headline "SLORC cadre address to committee plenum" across the screed and, in a gesture to context, added the postcode of the government massage parlour where this nonsense was spouted. By way of acknowledging the forthcoming "struggle session", the Red Guards had scattered subheadings like "Deracinate periphery roaders" through the bulging rant like wilting petals in a tank track.
My colleague - let us call him Phil - launched his re-education and self-criticism campaign with little initial resistance.
"The headline should say what the man talked about. Was it the economy? Politics? His mum? Old Guard splittism? Help the reader, eh, especially as it is probably just the one reader by now."
The militant youth nodded glumly.
"An introduction ought to tease out the gist of the headline. This braid-belted berk is complaining that decent people think his country's run by bastards for bastards, and it would take less space to say that than typing out 'Chez Madame Minh, 14 Ne Win Terrace, Rangoon Y666' for us to say as much. So let's do it."

Grunts of grudging assent. Phil was on fire.

Phil later admitted that he could have picked a better example from among the many Scrabbletastic names in the speech. But he was a manager. His was not to know, but to guide.

The worsted vanguard clutched their hand-thrown mugs of Fairtrade sludge in horror, for a shard of Caligari lightning had cast the gaunt spectre of Suu across Phil's chiaroscura pate. Her olive-black eyes were burning down an etiolated arm into the depths of his Springboks shirt.

Phil was saved by one of the shockworkers, who turned her russet cheeks on him and declared "I could never work with someone who didn't know who Aung San Suu Kyi was!"

"You'd better resign then, chuck, 'cos I'm your boss and I've never heard of him!" crowed our hero. San Suu slunk back into the inky depths of Lake Inya from which she had never fully emerged.

Phil went on to enjoy a satisfying career as a middlebrow managerial thug, the only man to have escaped the Damnation of the Daw. He survived because the sole spiritual force to enjoy greater unthinking bourgeois support than Basic Buddha is the British "Not In My Name" public-secretariat.

And that is why Aung San Suu Kyi and her malevolent minions have been so swift to silence The Guardian. Despite poor personal hygiene, its readers have a strength that passeth all understanding. Pray God that they never realise it, for they could destroy worlds.

Ignorance can be a deadly weapon in the right hands. Didn't an English judge once ask "Who are the Beatles?". It immediately put him on different level to everyone else in court.

I believe the judge in question had asked "Who are the beetles?" as an aside, convinced as he was that insects control the world ever since he mistook a 1959 television broadcast of "Quatermass and the Pit" for a news report.

It immediately put him on the same level as the jury and many other senior justices.

An alternative interpretation is that he said it to mean "Just who do these Beatles think they are?", being a massive Stones fan.

I liked The Kinks myself. They kept well away from nonsense like Oriental cosmology and Marianne Faithfull.

Without wishing to be overly fulsome in my praise, this article, like all your preceding ones, is erudite, amusing and a sheer delight to read. Your prose is simply exquisite, and you exhibit with enviable panache that almost-forgotten skill of story telling.

Apropos the subject matter of Dharma Chums, and following the link to the Guardian’s website you provided, I was shocked to read Cathy Scott-Clark’s and Adrian Levy’s rebarbatively provocative piece but gladdened by many of the readers’ comments below it. And the fact that The Guardian has now apologized for its Burmese blunder provides further solace.

Incidentally, I was complimented several years ago by a Burmese exile living in Bangkok for my near-perfect pronunciation of Aung San Suu Kyi’s name. Apparently, I was the first Westerner he had ever met who hadn’t mispronounced or mangled her final name so that it ended up sounding something like a cross between the attention-seeking cry of an Australian aborigine (i.e. “cooey”) and the Indonesian word for cake (i.e. “kue”). Quite a pat on the head for a thick Geordie cove with an A-level in chemistry, I should say.

Mrs Pouncer went to school with Marianne Faithful. The Mars Bar was apocryphal, I think she said. I would never have believed it anyway.

I think the judge asked of a defendant: 'Isn't that one of the Spice Girls?' I believe he was showing off to the court about how 'with it' he was. Small Faces were the best - music hall R&B.

There have been some impressive fighting monks. I believe one of the most famous head-slicing of Samurai was a Buddhist monk. I'm not sure how that worked theologically. Perhaps as long as you don't step on an ant, you're OK?

Your excellency, it is an honour to be praised by the Northumbrian aristocracy. The ability to pronounce creaking tones marks out the true Burma Hand from jumped-up military policemen like Orwell.

The Small Faces were cor blimey in a good way - Odettes to Chas & Dave's Odile. My ignorance of Buddhism in no way disqualifies me from holding opinions on its eschatology, so I reckon that decapitating someone means you'll come back as something without a head. Perhaps a worm or an alien.

"I could never work with someone who didn't know who Aung San Suu Kyi was!" She was lucky; I once had to explain to an (ex-) girlfriend what the difference between communism and fascism was.

Anybody remember: "Who is Gazza? Rugby or association football?"

I believe the standard definition is:

Communism. You have two cows. The state takes them from you, makes you live in their barn and sells you their milk once's it's gone off.

Fascism. You have two cows. The state takes them from you and shoots you.

A colleague once told me he overheard two of our customer relations people discussing where Jordan was. They concluded it was in East Asia. They also identified a photograph of General de Gaulle as Hitler. The sort of mistake you only make once.

Someone has just told me that the word "butthead" is in the last line of the Welsh national anthem. I'm feeling shocked and a little disillusioned.

The word is "bydded", GB, and means "pride in having hairy patches just under your eyes".

I can relate to this story, having myself worked in that very team a few years after the reported incident.

Mind you, I was recruited as part of a daring new "I say, why don't we recruit some people to the Far East team who actually speak some Far Eastern languages? Or who've been there? Or can at least find it on a map 2 times out of 3?" policy.

I was thus "trained" by the disappearing remnant of the people Boyo describes, which was a deeply surreal experience since they clearly knew ****-all about the place.

... and were no doubt very gracious to you about it!

Ah, that legendary episode! I remember the gang well. Not only did they eschew summaries and informative headlines themselves, but they prided themselves on removing same from any copy submitted by others for their attention. Happy days!