The Ring of Hwyl 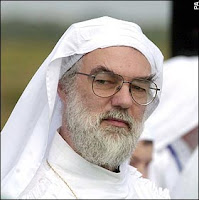 A communication from the Cymru Rouge Department of Inter-Faith Dai-alogue and Forced Labour Camp Quotas:
The electricity-based mediums of the radio and television have announced the death of the al-Qaeda leader, prodigal plutocrat and Greenmantle Pimpernel, Osama Bin Laden.
We, the Cymru Rouge, rejoice in the death of pretty much anyone, but are also aware of allegations that this comprador clerical reactionary and occasional Guardian columnist was a Welsh.
As the auto-selected vanguard of the Welsh Senate and People, we have established a committee of eisteddfod adjudicators, Paris-edjucated intellectuals and shrieking, hemp-clad child soldiers to investigate the matter.
Here are our interim findings. In common with the Welsh people, Bin Laden:
1. Liked caves, and the things you find in caves.
2. Spoke poor English and less Welsh.
3. Passed for Pakistani in the eyes of the Pakistani and US military and the Cambridge Footlights casualties who lurk in the 6:30 pm weekday trainee-comedian slot on Radio 4.
4. Thought C60 cassettes were new-fangled, and never quite got the hang of video (pronounced "vie-joe").
5. Liked dressing up in white robes and prancing around hillsides.
6. Supported an English Premier League (Association) football team
This is more convincing evidence than most of the guilty face before their fair tribunal and execution at the Cymru Rouge people's sheepdog trials, but there is more.
We are ecumenical in accepting damning proof from all sources, and so gratefully acknowledge the help of the Bernsteinian ameliorationists of Welsh Labour in uncovering the following links between Osama Bin Laden and the poujadiste bourgeois nationalists of Plaid Cymru.
In common with Plaid Cymru, Bin Laden:
1. Did not like low-flying US aircraft.
2. Was suspicious of Nato, the European Union and Capitalism.
3. Curried the support of the powerful hill-farming lobby.
5. Wasn't keen on Israel.
6. Had links to organised crime families.
The Cymru Rouge Department for the Identification and Eradication of Religion has further noted that Bin Laden, like Welsh Baptists, seemed to enjoy public piety without heeding the basic message of their respective creeds' founders.
Furthermore, the Welsh appreciated the teetotal tedium of Methodism but found it lacking a certain edge, and so tempered it in the fires of Calvinism.
Likewise Bin Laden thought regular Saudi Islam deficient in finger-wagging threats of sky-sanctioned violence, concentrating its venom as it did on non-Muslims. His embrace of the Takfiri Option, which considers most other Muslims to be little better than Rabbi Julia Neuberger, has the authentic Revivalist ring of hwyl about it.
The Department for the Abolition of Elections therefore urges Cymru Rouge cadres to carry out searching altruistic criticism sessions of all political opponents until the usual suspicions are confirmed.
Please note that a professed love of folk music is almost certainly a cover for fanatical hatred of melody, harmony and correct tuning, especially if accompanied by beards.
Henffych!
Brawd Rhif Un - Paul Pot
Brawd Rhif Dau - Huw Samphan
Brawd Rhif Tri - Ta Mock Tudor
Brawd Rhif Ankh - Hwsni Mwbarac
Posted by No Good Boyo at 8:11 am

I refute claims that the Welsh are no pro-Israel. When I was in Gwynedd ever second village was "Bethesda", "Sion", "LlanNazereth". Now to Osama, the story that he was romantically linked to Pippa Middleton is discounted. As we all know Russell Brand poses a greater threat to freedom than Al Qui'da. Finally the Navy Seals responsible are to be awarded more fish and a bigger beach ball. That is all.

How different the history of the 21st century would be if bin Laden had visited Wales in his teenage years and acquired a rudimentary knowledge of Pottism and the Welsh tongue. A boy who's had his horizons broadened doesn't need to shock people with his deadly weapon.

It is indeed bizarre how close the Welsh and Pakistani accents sound to the untutored ear. For instance, asked to say 'hwyl!' I would probably say halal, and vice versa, and would have said it well enough to have received the pound of goat nadgers/half pint of Trebor's Old Inscrutable that I had come into the shop/pub for in the first place.

It is true, Ciaran, that there's enough evidence to prove that Snowdownia is in fact the True Israel. If only Velikovsky had taken the scenic route to Beddgelert; he'd have had to revise that Revised Chronology of his to take in the House of Gwynedd.

And how sad that young Osama didn't visit Wales, GB. An encounter with the fat birds of Carmarthen would have convinced him of the virtues of Lapsed Methodism, as would a pint of Trebor's Old Dead Leg (a superior draught to Inscrutible, any day).

You're a linguist, Gadjo, so you might consider whether it's to do with intonation or tongue placement in dental consonants. Either way it filled the hours on 1970s situation comedy shows.

Worth noting that Greatest Welshman Ever Ryan Giggs's finest goal was scored at Highbury in an FA Cup semi-final reply, round about the time O'Sama was allegedly (possibly, though probably not) a regular. That alone would almost certainly have put your most colossal slate quarries at the top of his list of legitimate targets. Though I understand that polygamy is not uncommon in some parts of Rhandirmwyn and Lampeter.

You're not wrong, Pop, although, given the legendary appetites and lax relgious observances of Welsh women, polyandry is more common.