The Man on the Engels St Omnibus 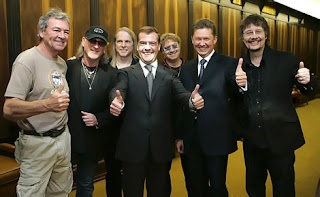 Roger Waters Out Of Pink Floyd is clearly tired of making people laugh through his music and has branched out into egomania as a source of mirth. Why anyone would want to pay money (get back!) for a slice of his progrock salami is beyond me, but then this is a country where newspapers employ astrologers, so who knows.
The epic courtroom battle for the honour of the concept album is a warning of how weird the early 1970s were for those of us old enough only to remember the penny tray, school milk and socially-acceptable racism.
As I've remarked before, the Soviet leadership correctly analysed the situation and sought to insulate Red Youth from hip-gyratin' Western good times by exposing it exclusively to aural mudbaths like Jethro Tull and The Doors. The result was several generations of otherwise healthy Slavs with a penchant for ruminative guitar solos and gnomic references to Mexican drug cures.
Such is the crystalline nature of the human spirit, however, that the occasional soul manages to deflect the daily dross from its sheer surface and let harmony, euphony and other Earth, Wind & Fire backing singers flit in.
One evening I was slumped in my seat on the bus home. It was the cold winter of 1986 in Voronezh, the Bridgend of the Soviet Union. I'd spent a few hours with an agreeable selection of provincial bohemians - artists who lived in boiler rooms, guitar-playing medical students with a ready supply of ethanol, kohl-smeared girls in Polish sweaters a size too small, a Latvian who could open beer bottles with his eye socket, and a character simply known as "Ruslan, the Meat-Eating Poet".
We'd spent our time in a way familiar to all British students in Gorbachev-era Russia: drinking whatever was available, eating pickled matter, smoking dandelion & gunpowder cigarettes and debating who was the bigger dickhead - the General Secretary or President Reagan. Mrs Thatcher was universally admired in the Soviet Union for being a woman, and it was a brave CND-badged drab who dared to question her Klebb-like perfection.
Inevitably conversation had turned to music, and I ended up trying not to explain Genesis lyrics to the masses. I even produced a photograph of Phil Collins and noted his facial resemblance to 78% of all KGB officers, to no avail. As usual I left them a few cassettes of The Fall and hoped they hadn't been taped over with Modern Talking by the following week.
I watched the sleet slide down the totalitarian advertising hoardings - Use Toothpaste! Drink Juice! Ensure That Your Television Does Not Explode! - until the doors clattered open and a stringy teenager in Baltic knitwear loped in. He sat opposite for a while, then realised with that Soviet social telepathy that I was a real foreigner, not just some loser from Leipzig.
He moved to the seat in front of mine and, after some hesitation, turned to me with the English form of address unique to that time and place:
"I'm sorry, maybe you speak English?"
Soviet schools taught that this is how to speak to the British, in an effort to make the average Englishman laugh in the face of his Russian interlocutor and turn the latter into an embittered insurrectionist. You could tell KGB plants in the student milieu because they always knew the correct form of address, even if it amounted to "Stand and face the wall, Prisoner Ж1948Я!"
I told my young friend that I did speak English.
He thought for a while, then asked "So, maybe you like the music of Pink Floyd?"
I had two basic options here:
Instead I distilled the essence of the latter in the concision of the former and replied "No, I'm afraid I don't".
My companion sat silently for a while. The bus reached its next stop, and he ambled to the door. As it opened he turned, smiled, and said "Neither do I!" With that he stepped out into the snow and was gone.
Whenever I hear of new disappointments from Russia I think of that brief and unsentimental exchange. As a generation grows up with no recall of either Communism or an effective opposition, led by a president who seeks out the company of Deep Purple and a prime minister who pretends to fight bears, I hope my fellow-traveller is still out there somewhere, quietly keeping his children's minds clear of all this cant.
I remain an optimist about Russia, all told. It has survived Stalin, brown nylon flares and a health system based on grain alcohol and being punched in the face, so it will get over these preening dwarves. When the final call to account comes, I'm convinced the Man on the Engels St Omnibus will answer for Russia.
And I bet he hates Oasis too.
Posted by No Good Boyo at 10:22 pm 14 comments:

Labels: Sakharov, three chords is all you need, Zvuki-Mu

The Mark of Mahmud

Polish composer, statesman and - according to Wikipedia - hermaphrodite shapeshifter Ignacy Jan Paderewski used to tell a joke that summed up European interbellum national characteristics. A representative group is asked to write a book about the elephant:
All good clean fun, and an insight into the stereotypes of 1919. The perception of Englishman and Russian has changed since, and the punchline then was the Polish obsession with their Cause. But I find the French response more interesting, for out of it grew the entire discipline of cultural history. 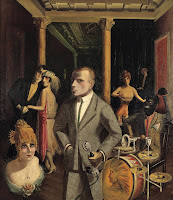