Autumn is upon us like a damp, slightly-aroused setter, and still no word from the BBC about my programme suggestions. Never mind, here are a few more. Channel 4 can have them too, if they like. I'm open to a Dutch auction, or indeed anything else Dutch except their dismal breakfasts. On the subject of which:

1. Danny Dyer's Hard Men: the poignant spam-faced professional Londoner travels to s'Achtengracht to get to know the hardest men in Holland's XXXX gay porn film scene. An interactive feature on digital called 'Danny Dyer's Old Mum' will see mildly-sedated female relatives of the downward-spiral star talked through proceedings, both on set and in traction, by "Backpacking IV" star Bent Vanderpump and a team of proctologists.
2. Your Thought For The Day: Radio 4's team of house-trained clerics on the 'Today' programme are obliged to answer questions from listeners, instead of cramming some twee homily into the day's events. This week Glasgow University's Dr Mona Siddiqui is asked "Have you considered a sabbatical at Riyadh Poly?"
3. Oliver's Army: Following his success in reminding the Americans exactly why they had a Revolution in the first place, galley urchin 'Jamie' Oliver brings his unique blend of matey condescension to feeding hungry squaddies worldwide. This week Jamie tries out his new vegetarian menu on the Armed Forces of the Russian Federation. Next week Heston Blumenthal devises a basic meal that Jamie can consume through an array of tubes in Moscow's Botkin Infirmary Intensive Care Department.
4. Meidl Madonna: Every orphan's nightmare Madonna Ciccone visits the Jewish mystics of Israel's holy city of Safed and immerses herself in the esoteric depths of Lurianic Kabbalah. Episode One: Madonna has her head shaved and is told to stand behind a wall and shut up, already. 5. Suor Angela: German Federal Chancellor and Theresa May-o-gram Angela Merkel enacts Puccini's opera Suor Angelica in the full habit of a Benedictine nun, albeit one fashioned from latex. Well, I'd watch it. If need be, I'd direct it.
If anyone knows any machers I'd be grateful for a tip-off. No one wants to spend the next few months watching Minnie Driver, except perhaps in a lunar module. 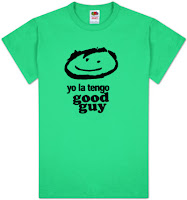 
Mind you, that wasn't my worst encounter with record-store clerks. There's a hardcore faction camped out at Tower Records in Tel Aviv. I rather like Israeli pop music of the 1950s and decided to buy a couple of compilation CDs while on holiday in the White City.
"You're buying this?!" barked the Clerk, brandishing "Our Tiny Country" like a Manx passport. "It's for my Dad," I mumbled, thereby slandering a man who thought music took a wrong turn when it spurned Skiffle for "that Presley boy and his drums". I thought of grabbing some last-minute Aviv Geffen, but rightly decided it would only make matters worse.
I'm glad I've now moved into the post-Cool phase of life. I've two children, a mortgage, car, career, standing orders, and a wife to run it all. I'm expected to dance badly at weddings, and look forward to embarrassing my daughter at school and in all social settings. I visit National Trust properties and enjoy war films in which our side wins. I find Felicity Kendall attractive.
All I have to do before dying is avoid humorous clothing (hats, Simpsons socks, "kipper" ties) and being jail-baited, and Paradise should beckon. Unless the gates are manned by a Recording Clerk Angel, rooting through my après-vinyl purchases with a beady, kohl-framed eye.
Posted by No Good Boyo at 8:53 am 16 comments: