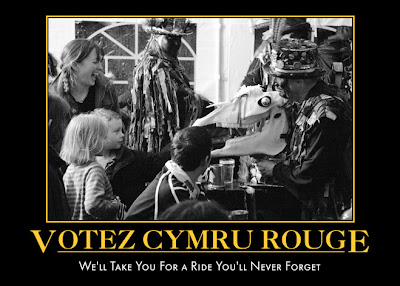 In me didst thou exist 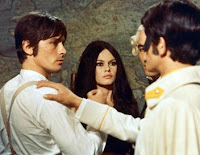 People stop me in the street, press their webbed fingers to my breast and whisper "Please, don't". I nod, for they have understood my blog.
I'm often embarrassed by these unspoken comparisons with the giants of Internet comment - Sullivan, Geras, Blair, Daniels. I smile ruefully and explain, as my interlocutors step back and sometimes weep in awe, that I cannot claim to graze in that hallowed paddock, for my meadow is free of trolls.
A web blog worthy of the cut'n'shunt name has a least a pair of flecked buffoons staggering in and out of its comment section like a Barmouth Community Police Officer:
The worst I've had to endure is:
I drove these underarm objections into the long grass with the oiled willow of my dialectic, and therein lies the dilemma. So straight is my bat that even Trotsky would retire to the pavilion in a hail of bails, fearful that my Maoist cut and thrust might turn literal.
In addition I share the lady blogger's curse of being courted by my comment clones. Once glance at my photo and women want me, while men and the higher primates want to beat me, so all abstain from aggro for fear of forfeiting my favour.
Does this indulgence frustrate me? No, because I know my nemesis comes. For one day I shall troll myself.

I first became aware of my Doppelgänger as a student in Swansea, the Heidelberg of the Gower Peninsula hinterland. I'd entered the Inter-Collegial Eisteddfod translation competition in an attempt to impress a woman, any woman.

My rendering of Chekhov's "After The Theatre" into Welsh bore all the hallmarks of having been knocked together at the last minute, which made it a searingly honest piece of work. It came in third in a field of three, a decision that scotches the accusation that the Welsh are lacking in charity.

I trudged into the weekly self-criticism session of the college GymGym (Y Gymdeithas Gymraeg) Welsh Society, which began after apologies to the members of the Gay & Lesbian Group's Love Muscle faction who had once again been misled by the acronym.

To my surprise I was not Oswestrised for my failure. Panda-eyed Portalbot peris and Capel Seion sign painters alike rushed to laud my apparent triumph. Eisteddfod entrants compete under noms d'ardoise - flinty bardic pseudonyms - but the final bulletin also publishes their real names. I glanced at it. The winner's monicker was the same as mine.

I decided to be generous and share the credit for the other Boyo's work. Chips were bought. Harps were plucked. The English Department was daubed green in my honour. Life was good, but soon doubts crowded out the carols of crwth and cryman.

My double studied at the same small college, spoke Welsh and Russian and bore my name, yet we hadn't met. Others had, though:
It was only a matter of time before a Labour poster was stuck on my door to show the Merched Y Wawr (Provisionals) hit squad where to find me. I had to get to the bottom of this or risk being "sent to Shrewsbury", as the queasy euphemism had it.
Some enquiries in the queue for cawl uncovered several sightings of Boyo II. He looked "like a Welsh", which could mean anyone under 5'6" in love-bites and stone-washed jeans, "sang like a cormorant" and had to pluck his own cheeks.
He was nonetheless distinct enough for at least one bouncer at Cinderella's night club in Mumbles to give me the S-bend shampoo ("It's fucking tasselled fucking loafers by 'ere you Car-fucking-marthen fucking cowboy!") only ten minutes after shaking my double's hand and pointing out the cockles and custard slice free buffet.
A portfolio of like provocations persuaded my peers that this persecutor was real, at which point he vanished - taking with him my stolen moment of Chekhovian glory. Inept renderings of belle epoque ballroom terms from my translation still make it onto the "funnies" page of the Welsh baccalaureate syllabus.
My shade parted the drapes a couple of times while I was studying in London, where his priapic pursuit of inversion scuppered my coracle of love on the skerries of slander. I heard of him a couple of times in later years, when new acquaintances along the Caspian shore cited friends who had met this degenerate djinn they called Boyo.
He's faded in recent years, but I have no doubt that a comment will one day appear on my site condemning me for some motion or act between which that familiar shadow has fallen. And then I can call this a Blog.