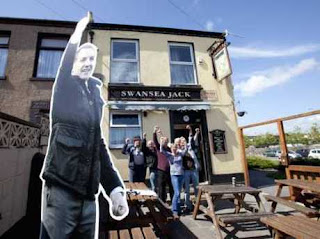 "What are you staring at?" Annette asked the pair of blurry-faced soaks across the bar. "Ewer tits, luv," one grinned. He raised his glass and returned to the pleasures of the contemplative life.


"Swansea," I said, "is another country, they do things differently by here."


Annette had been a student at University College, Swansea (formerly Sketty Anglers Club) long enough to have shed her Saxon, secular resistance to the direct and deeply spiritual sensibility of the Cambrian aesthete. And Swansea is where you are most likely to encounter this Epicurean approach at its most expressive:

Swansea, however, is Wales's Casablanca. Bohemia sups with the picaresque in the curved and shingly Rick's Bar that is the bay. High above, Mumbles maquisards lead thirsty refugees from Calvinist Carmarthenshire through the Rosehill Quarry corridor. And there's no Major Strasser to spoil your good times, although the local Captain Renaults retain a professional interest in bribery and Bulgarians.

Just as Ray Liotta in Goodfellas always wanted to be a gangster, I've endlessly yearned to live in Swansea. My father used to drive the Trawscambria coach down there from Dolgellau, and it was a regular treat to accompany him. We told the school I was off gelding shepherds or something suitably rural.

Our day out in Swansea began with an early lunch in one of the bombsite pubs near the bus station, a rummage in Ralph's Bookshop, then a Bond film on the Kingsway (first watched, then acted out) before herding our day-release Yetis back to their Snowdon sanctuary.

That first descent into Swansea stirred my Manichean soul, for the town is bisected by two axes (NB "Welshisms" will steadily creep into my copy. There's a prize for the reader who spots them all. For an explanation, follow this link from Madame Boyo).

At the end of one axis pearly Mumbles bobs in a cornflower sea, while at the other Port Talbot steams in the sulphurous Sun. Between them curls the Bay, a drunken proscenium for the cast of local strolling players.

The other axis of diametrically opposed opposites gifts the town a sunny, palm-strewn esplanade that makes Cannes look like Clacton, while simultaneously and at the same time drawing a veil of widowed rain across the Swansea Valley. This shields our Shangri-La from the hairy-handed hordes beyond Cwmbwrla.

The fulcrum around which these twin axes revolve is the Swansea Jack pub on Oystermouth Road. They say the flâneur draped across a chair at Les Deux Magots will see le Tout-Paris pass by.And if you crouch beneath the boarded windows of The Jack for long enough, all the town's burglars, fences, cock-wrestlers, shapeshifters, amateur apothecaries and punch-up paramours will whirl before your eyes on a fist-shaped carousel.

The off-yellow omphalos of The Jack was, in my day, ringed by the bus station, magistrates' court and jail, like the crust on a teenage self-piercer's navel. Its patrons would spill out of the station into The Jack, wake up in jail, drag their truncheoned pods across to the magistrates' court, return to jail, get released, back down The Jack, wake up in jail, and so it goes.

I am convinced that it is this very perpetual motion that agitates the Earth's polar axis, rather than some fancy science talk about gravity, the Moon and ley lines. The Blind Watchman sets his Seiko by the opening times of The Swansea Jack, and you knows it.

Like every downy-bearded blow-in, I dreamed of becoming a latter-day Kardomah Boy. All that's left of these efforts is some unusually bad verse and a draft screenplay. Provisionally named "It Happened By Here", It toys with motifs from Astérix in a Britain occupied by the Nazis in 1941:

The King's in Canada, Churchill's in his cups, and the sole beacon of resistance is The Swansea Jack, which has held out against what the defenders call "them fucking Frenchies" since the Battle of Muswell Hill. It ends with what my co-writer Sioba Siencyn dubbed a "brimstone barbecue of the Boches", and would have done for Oystermouth Road what Twin Town did for Dunvant.

S4C were interested, but saw problems with getting European Union funding.

Then the dam of life burst, and cast me on the lower reaches of the Thames where I wallow still. Yet Swansea moments recur even here, like a madeleine dipped in oyster water.

Siencyn and I were enjoying a pint of Felinfoel, the force that drives the green fuse through Gorseinon, at the Reading Real Ale Festival some years back. The juxtaposition of beer with Englishmen - and this alone - naturally bade us speak Welsh.

A young fellow sidled over and asked whether we were from Wales. We were. "Can I ask you a question?" he ventured. "No doubt," we replied, nodding that he should first prick our tongues with hops. He returned with three more pints, and proceeded:

"I was at a stag weekend in Swansea - you know it? - a month ago, and we'd just drunk our way alone the Mumbles Mile to the pier. We were merry but hardly boisterous, let alone lairy. Just waiting for the last cab back to town.

"Then a bunch of local lads come up and say 'scuse us, but, fancy a fight?'

"We pointed out politely that if it was all the same to them we'd rather not, when they began pleading. 'Go on, mun, just a quick scrap!'

"I was about to explain that we were social workers who work at returning mental cases to the community, and therefore had full respect for Wales's unique and endangered culture, when each of them launched himself at one of us, and we rolled to the ground.

"I expected the worst, but was surprised to find that I was on the receiving end of little more than a gentle kneading, like a patty of breakfast laverbread. I parried in kind, then after a few minutes one of the locals yelled 'hey, they're letting us in at Cinders!'

"With that our opponents stood up, dusted off their stonewashed jeans, beamed 'magic scrap, mun, cheers!' and were gone."

"What was all that about?"

Ah, where do you begin to explain the Friendly Fight, Wales's most potent yet unsung contribution to world culture? We're not talking about Khrushchev and Bulganin stopping their limos at Kuntsevo for a drunken rumble in the tundra, or some John Wayne saloon-bar blarney. This is the altruistic sharing of theatrical violence, with the aim of fostering the Welsh Classical unities of "closing time", "two-fisted action" and "any place will do".

A Welsh night out - or "sesh" - cannot whimper away on a wave of "see-yas" or drown in a repeat kebab's chili sauce. It must soar to new heights of purpled-panted passion at the Pontarddulais bus stop, or else vault slag-heaps of convention with a slow-burn scrummage.

Only then, all split-lipped, slapped-up, sung-out and spent, can the Welshman return in peace to greet his waiting wife, whose silhouette already arches like a curler-crowned Medusa amid the wheelie-bin pillars of his home.

Swansea's genius for geniality cushions the cosh of conviviality as it cracks your coccyx on a warm West Cross night, I expanded to our rapidly retreating guest.

Nothing sums this up better than one of my last sights of Swansea on a college visit many years ago. Some kindly councillor had put up a concrete island in the middle of Oystermouth Road to help civilians flee to the safety of the beach. As we drove by, a vest-clad veteran had commandered the island in the name of The Jack. Girdled with cider, he swung his septic fists at the cars flying by on both sides, spinning and roaring like a Cambrian Caliban.

The drivers ploughed on, sure they had just missed a glassing. But the Man of the Jack wasn't warning them off. He was inviting them in for a few jars, some seaweed, and a chat with his friends dead and living. This sawdust-stubbled Cyclops will endure when all the marinas dry up. And while guests from the future puzzle over our cryptic cycle paths, he will still be drinking down The Jack. And it will always be your round, mun. 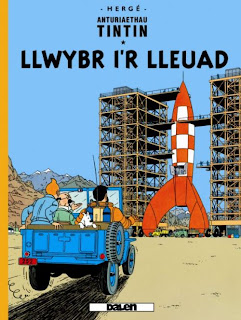