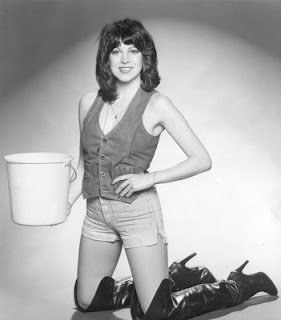 The Radio 4 reading of Hellhound on His Tail has brought home to me one of the many differences between myself and the late Martin Luther King.
Dr King's subconscious thoughts, to judge by his "I have a dream" speech at the Lincoln Memorial in 1963, were blessed with a Periclean progression and majestic, King James eschatology that mine lack.
I resent this, as dreams are yet another aspect of my life over which I have no control. Teenage months spent sleeping with a picture of Sally James (above) and a sachet of Bird's Custard under my pillow confirm this.
Being married to Mrs Boyo means never having to remind yourself of your own essential shallowness, but History persists in doing so:
My devotion to Marxism is in part a calculation, based on the 20th century record, that it might best help me to rewrite this past.
Or else I could go back to Uncle Karl himself and, instead of whining about History like some Silurian Stalin, actually try to change it. Here I'm handicapped by honesty, a character flaw the led to my first expulsion from Wales.
If I tried to emulate Dr King's speech today, for example, it would go something like this:
"I have a dream that I am sitting near the back of the Corris Uchaf to Machynlleth bus, when just about Esgairgeiliog the crypto-Welsh character actor Peter Vaughan sits down next to me.
"I have a dream that Vaughan is in the guise of 'Genial' Harry Grout, Mr Big of Her Majesty's Prison Slade out of the 1970s British crim-com Porridge.
"I have a dream that 'Grouty' begins to sing 'Two Little Boys' to me with sinister suburban sibilance. I have a dream today!
"I have a dream that little Welsh pensioners and little Brummie dole-siphons are sitting all around us, hoping that Bing Crosby might get on at Maespoeth and croon 'The Little Drummer Boy', with or without help from Mr David Bowie.
"I have a dream that, when the ticket inspector boards the bus near the Pennal turning, my fellow-passengers will not be judged by their sentimental musical taste but by the content of their wallets! I have a dream today!
"Free at last! Free at last! They all qualify for the free bus pass!"
It's doubtful whether these powerful images would have inspired the Civil Rights Movement, but Americans of all hues would have gone away a little wiser about British popular culture, mid-Wales topography, and the concessionary fares offered by the Crosville Cymru transport giant.
Have any of you Cymru Rouge cadres had a dream that might have changed history, or at least moved rather than vaguely disturbed the Wretched of the Earth?
And please bear in mind that this web blog officially supports Jung, so none of that mucky Freudian stuff about my wanting Bing Crosby to be my dad. I get enough of that from my mother.
Posted by No Good Boyo at 12:46 am 20 comments: