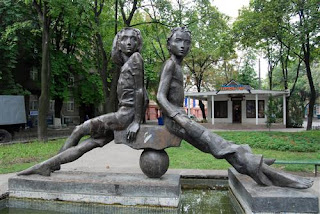 With summer ending, The Welsh Tourist Board of Wales is stepping up its campaign to bully some imaginary English poshboy into spending a few weeks glaring resentfully at his made-up wife over a slate of flummery in Lleyn.
And why not? We Welsh have so far been spoiled by the quality of our summer visitors. The questing Dutchman, panning for Mawddwy gold; the German couple with gunmetal eyes, calibrating their theodylites to sort the mountains from the hills; the vanful of Poles a-kindling in your copse - they all love Wales for what she is, so why not ring the changes and welcome a fellow who calls the game "rugger" and watch how long it takes before someone paints him green and sets his car on fire?

This raises a related question. While the world roils in Wales's tepid embrace, where can a Welshman go? Like Italians we are not great travellers, as we already live in a country that has everything - cakes, more than one coastline, y-front-rending women and no Highway Code.

I suggested Ukraine as a worthy holiday destination way back in the days when I still blogged in Wenglish. So let me now highlight its fine port of Odessa.

As close readers know, Madame Boyo and I spent our honeymoon in this Black Sea Tangiers and promptly dubbed it cymreigiol - worthy of the Welsh.

Russia's relationship with Europe has always been awkward. Peter the Great intended St Petersburg to be Russia's "Window on Europe", but built it on a troll-dark Finnish swamp miles from anywhere. Catherine the Great had the advantage of being an actual European, but still laid out Odessa somewhere over the Ottoman Empire.

It was a French-run free port for much of the Romanovs' reign, and managed to maintain its louche, Interzone buzz through Civil War, Stalin and Stagnation, topped up by a few war years under or occasionally straddling the corsetted Romanian officer corps.

When the various states of the Soviet Union just stopped turning up in late 1991, Odessa found itself, minus one "s", as Ukraine's main port. The Odessites adapted to the new country in their cosmopolitan way by speaking Russian but acting Ukrainian, and soon found a steady income from channelling the hinterland's chief exports - construction workers and whores - to Turkey.

Odessa has not allowed the advent of democracy to stifle its picaresque heritage, and the happy proximity of the brigand republic of Transdniestria to the northwest ensures that there's no better place for car thieves, vote-riggers, plutonium smugglers and taxi drivers to flourish.

Moreover, if there are any cocks trying it on, Odessa will snook them:

1. The Romanian occupiers killed almost all of the city's Jews, who themselves weren't too popular with Ukrainian or Russian nationalists either, so free Odessa chooses the splendidly Semitic Mr Edward Hurwitz as its elected mayor whenever the central government allows.

2. Viktor Yanukovych, the cloddish Ukrainian president and Kremlin fluffler, is no fan of Odessa, given its overall high IQ and lack of coal mines, so the Odessa Port Authority has reciprocated by putting up a Soviet-style banner of one of his most banal statements over its gates - "Professionals ought to work in the transport system" ("B транспортной системе должны работать профессионалы"). Yanuk of the North is flattered, and everyone else chuckles into their breakfast cognac.

The Soviets renamed the city's streets after random anniversaries, mass-murders and root vegetables - "Yeah, I'll see you at the corner of 29 Years of the Armenian Power Grid and Turnip, opposite Boston Strangler Square". Ukraine expected free Odessa to give them suitably Cossack monickers - "Jewbaiter Passage", "Square of the Sacred Sword of St Skovoroda" - while the looming Russians wanted the Lenins and Great October Socialist Revolutions to stay where they were.

The Odessites simply ressurrected the French names of the past, so you can still flâne down Richelieu Boulevard and De Ribas Street with a sprig of hibiscus in your lace-sleeved hand.

But the true jewels of Odessa are its women. Ukraine, like most Slavonic countries, is a British sit-com writer's dream - the men are oafs, while the women are sharp yet easy to handle, like Stanley knives.

Not in Odessa. The local men are cheery drunks, of course, but the women wander around as if they were auditioning for "Post-Coital - The Musical!", with hair akimbo, 3-D lipstick and thoughts that tune in and out.

Madame Boyo and I sought ice-cream, directions to French Boulevard and some sense from several Odessitas, and got nothing but asymmetrical smiles, Expressionist hand gestures and a rant about why President Yushchenko wasn't doing something about it (he'd been out of office for months).

But the finest tale of local womanhood came courtesy of Captain Ponomarev and the Odessa Yacht Club. This enterprising mariner and his chums ran a tourist entrapment service. It consisted of dressing an unusually coherent young woman in garments a size too small, positioning her on the coastal path with some Yacht Club brochures, and letting male lechery and female patience do the rest.

Within moments she had delivered us to the Captain, who put us to the test. Would we like a cruise around the bay in one of those motor yachts you see accountants fall off all along the Thames, or in a proper sailing boat? We passed, and hopped aboard his bilious barque.

We sat towards the prow with neither life-jacket nor harness, as Capt Ponomarev swung his great boom about our heads and scythed between tankers and towlines with the occasional arcane order to Bo'sun Grafich.
We clung to one another through more degrees of list than non-Odessan geometry allows, while the Captain recounted the proceedings of the local Pirate Society, of which he is Secretary and Keeper of the Plank of Justice.

(The chairman, as it happens, is a dentist. He carries out surgery in full rig on public holidays, reserving antique equipment for members of the City Council.)
I asked the Captain whether he had many local passengers on his Ship of Ghouls. "You know we call the city 'Odessa Mama'?" he began. "Well, one day a couple of our own Odessa mamas drifted down here and asked whether I did cruises of the bay. I said I did. With a satisfied cluck they parked themselves at the prow, so off we went.

"Once we'd left harbour one of them asked whether I had any coffee below deck. I did. 'Two coffees, please.' I fixed the coffee, passed them the cups, and out we surged into the swell.

"I gave them the big tour. 'Here's where the Germans bombed the Crusier Shnorbitz in '41, and just over the top of that crane is the Palace of Hadji Girai' - but I might as well have been yodelling.

"We crested some bell-bottomed waves, we tasted a whaler's spume, we passed through the shadow of a shark, and all the time they were like this -

"'Mrs Lyakhobiy, her as isn't no better than what she oughtn't to be, well, you've seen the hat, of course? If you can call it a hat. I had to whack my Grisha's cockerel with an icy spoon, if you catch the drift - '

"'Ooh, she never? Her neighbour, the one whose sister ships those dodgy plums from Romania in her stays, well, she robbed a couple of mackerel from the market, and there was no way of telling, if you know what I mean. And that Tymoshenko woman, if she is a woman - '

"A good hour and a half this went on for. I got them back to harbour, they thanked me for the coffee, stuffed enough money in my mitt and wandered off. They weren't wrong about that Mrs Lyakhobiy, either."

We reflected on the Eternal Mystery of Woman for a while as Grafich tacked us back into the little harbour. Suddenly we found ourselves beset by a Lilliputian fleet. Tiny sailing boats, each bearing a small boy, bobbed about us. A man by the quay in sinister Soviet-era tinted specs was yelling random orders at them. "Yura, haul your mainbrace! Shura, your boom's awry! Dima - are you listening? Dima?! - "

Dima, in Tot-Yacht No.9, was a lad apart. The others, none older than ten, acted either assured or appalled as we cleaved their convoy. But Dima, kitted out by his guilty dad in sailor's peaked cap and braided jacket, was pure Odessa in his indifference to our hulking hull. He sailed on as the others scattered. Capt Ponomarev ordered Grafich to steer sharply to starboard.

"Who are they?" asked Madame Boyo, as the junior service regrouped before their quayside commandant.

"That's the kids' trainee yacht club," beamed Ponomarev proudly. "We take them from five years onwards. Even give them life-jackets. Our little pride and joy."

The children stumble shaken-shanked onto the decking, all apart from Dima. He still sat at his mast, watching the sun soar over Trebizond, ethereal and unconcerned.

I can't help but think that Odessa and her Dimas of all ages will always hover between sky and sea, like Tadzio on the Venetian sandbank, just out of the ruffians' reach.

"What's your junior yacht club called?" I asked as we slid into our mooring. Ponomarev glanced over at the boys, nodded, and replied - "The Optimists".