Some time ago I found myself sitting opposite an old college lady-friend on a train. She asked me what I'd been up to since being drummed out of Wales. I outlined my career as media mercenary, following walk-ons in showbiz raiding parties and the ironic smuggling of non-contraband goods.
"And what about you?" I concluded in my best Prince Charles manner.
"I'm a dominatrix," she replied with the best smug-plug since a Belarussian mother-in-law told me she'd danced with the Tsar.
Channeling pure heir-du-trône, I ventured "How interesting, and what does that entail?"
"I kick middle managers in the pods with my Christian Louboutin slapper wellies for 200 quid an hour, and don't even have to listen to them complain about their wives."
She belonged to the dumpy, frumpy and grumpy category of Metroland gals - second daughters who end up as council leaders' PAs - so it was good to see her penetrating a profession that I lazily associated with angular Germans and Oriental ladies in catsuits.
It also explained what you do with an lower-second degree in geography.
"What about Repetitive Strain Injury?" I inquired.
"You bet they have!" she beamed.
"I meant you."
"Nah, I swap legs. It's quite aerobic."
Not sure what knackersmacking had to do with yoghurt, I asked whether she varied it with other forms of violent perversion. She provided a list of alarming gerunds, all of which seemed to involve applying kitchen implements, manual or electrical, to her client's danglers.
By now we had the carriage to ourselves, so she elaborated on her favourite practices.
"People talk about BDSM, but there's a world of difference between S&M aficionados and the adepts of bondage. I much prefer the former. They are usually well-born, bohemian or members of the higher professions, and mess not about.
"'Good afternoon, Mistress Cadwaladr! After my opaque summation, the jury will be out for at least two hours. Kindly belabour my buttocks with whatever pieces of Javanese furniture you might have to hand, then disparage me in your choicest fishwife demotic.' And then off they go, happy as hogs.
"Bondage bores are another matter. Teachers, social workers and reformed clerics in the main, they sport facial hair, broadsheet newspapers and inky little diagrams of precisely how they want to be suspended from my rafters.
"They insist on using Japanese technical terms, which they mispronounce, and once they're up there all you get it 'Ooh, mistress, if you don't mind, I think the 股縄 may be slipping out of the 海老責め! Could you twist it up a notch?'
"Then they hang around for ages doing nothing, just moaning loud enough to drown out my iPod. And once it's all over they email me 'feedback' on the session. Needledicks!"
I don't think Lord Tebbit himself could have coined a pithier metaphor for the public sector.
The Boy Scout devotion to knots shown by Mistress C's trussing companions confirmed my conviction that DIY is the true vice anglais. It poisons the whole of English life, from Fred West and his patio tombs to Mr Cameron's Big Society, via the have-a-go-hero on his way to Casualty in two separate ambulances.
And this taint spreads from the lower-middle classes:
Only the petite bourgeoisie tamper with motor engines, venture into drains, wrong-end soldering irons and lose rabbits in ersatz top hats before rooms of tearful tots.
On a global scale I'd hitherto always associated the Japanese with the Scots:
But, on reflection, perhaps the true kinsmen of the Japanese are the English:
The Japanese also mirror the English class system, and I bet their salarymen like being mortally coiled too.
There are vital differences, of course. Japanese cars work, and the country has no equivalent of the Welsh. The Hairy Ainu match most of the roles performed by the Scots, although the Japanese are careful never to let them rule the country.
But the most common weal of England and Japan is decline. While we dismantle the Welfare State, Japan slips behind China among the mercantile nations.
Perhaps the road to recovery lies in abandoning the cult of DIY. I assume the Japanese are prey to this too, given the prevalence of paper houses in their rice-bound realm.
Aspirants to public office could be asked what, in their view, is the correct use of hemp. If they reply that it involves enhanced smoking, they may proceed.
If they mumble something about resentful redbrick lady graduates brandishing the I-Spy Book of Knots, the Switchfinder-General should do everyone a favour and belt them up.
Posted by No Good Boyo at 5:28 pm 34 comments: 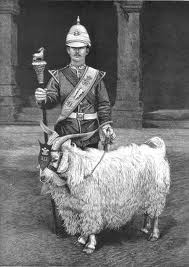 I pay the BBC licence fee so that I don't have to waste time listening to opinions on other wirelesses, so when a chap called Leyne assured me that both the argy and the bargy in Tunisia would go no further I was happy to switch back to the Third Programme for some soothing Xenakis.

I was not pleased to wake up two week later to discover the Copts, Ankhs and other denizens of Durrell's feverish novels getting their Hannibal on in the teeming streets of Egypt.

"What's wrong with you? Arabs have the right to elect useless sods instead of just inheriting them, as you pointed out in your last post!" a reader might rile.

Indeed, and I like everyone else totally and utterly support the revolting Egyptians in all ways but the ones that might do them some good. The cause of my chagrin is, as ever, purely personal and national:

"So, you Welshes have screwed up another perfectly decent holiday resort. Thanks a lot, I was looking forward to a spot of shark-punching down Sharm el-Sheikh, now I'll be lucky to get a week in a bucket dangling from a Somerset gibbet."

Yes, the conspiracy theorists who are my colleagues have worked it out. The cause of Mr Mubarak's downfall is once again The Welsh Connection.

When the moderate, non-violent Islamic Jihad gunned down President Anwar Sadat at a military parade in 1981, BBC Wales's flagship news pit-pony "Wales Today" was quick to spot that the new president had a Welsh wife, Suzanne.

Wales was a land of austerity in the early 1980s, and even news was scarce. As a result, smouldering Gail Foley, random sports bloke David Parry-Jones and the other news colossi of "Wales Today" spent much of their time finding Welsh angles to other countries' stories in order to pad out a bulletin otherwise devoted to rugby disasters, werewolves, and firemen shrugging in front of charred holiday cottages.

A particular low point was the Jeremy Thorpe trial. This tale of former Liberal leaders, by-the-hour inversion, velvet collars, Great Danes and, for reasons that escape me, former King Constantine of the Hellenes attempted to grip a nation already being thoroughly gripped by the newly-elected steel claws of Lady Thatcher.

It received lavish daily coverage on the BBC national news, and Welsh viewers had to sit through it all again on "Wales Today" just because the caddish Mr Thorpe's co-defendants were a spit-roast of Welsh businessmen.

The Mubarak succession was a gift to "Wales Today". They yanked a cub reporter off his permament pitch outside a rainy steelworks, gave him a Fodor guide to Luxor and the bus fare to the Mubarak in-laws' council house in Pontypridd.

What reporters are meant to do in such circumstances is ask about Mrs Mubarak's early life, her forgetting the words of "Y Wiwer" at the school eisteddfod, and other things they might know about, not demand instant analysis of the Middle East like some Radio 4 harridan.

The Ponty Mubaraks, like most of the Welsh population, conversed by constantly rearranging the words "Duw", "fuck" and "aye" in overlapping patterns like an early Steve Reich piece, so the ensuing doorstep interview was a masterclass in the clueless leading the scabrous:

[Shiny reporter] "Do you think your relative Mr Mubarak will be a stronger leader than the dead Mr Sadat is?"

[Unshaven man in vest] "Well, he won't let hisself gets killed so easy though but and."

It didn't get any better, as question after leading question produced ever-more baffled responses from a group of people who, come to think of it, were quite possibly not even related to Mrs Mubarak at all. It's not an uncommon name along the Rhondda Riviera.

I like to think Suzanne's ghastly relatives all descended on Cairo in 1981, like secretaries on a cake trolley, in pursuit of cockle concessions and anything they could carry off.

The Egyptians are used to being ruled by other people - Hyskos, Greeks, Romans, Ottomans, Albanians, the English, Israelis (parts only), and giant Sun-rolling beetles if you go back far enough - so Welsh administration was likely to be relatively benign.

After all, we Welsh have long-cherished fictional links with the Ancient Egyptian people, largely thanks to Prof Sir John Morris-Jones's article "Pre-Aryan Syntax in Insular Celtic" - an ambitious attempt to bypass England via a Welsh-Berber linguistic bridge across the Bay of Biscay, unfortunately based on occult loon Prof Wallis Budge's ouija-board guesswork about Ancient Egyptian grammar.

But enough is enough, or "Kifaya!" as they say in Ponty. Seething increased in recent months when it became clear that Mubarak intended to transfer power to his idiot son Goronwy (known as "Gamal" in Egypt, owing to the absence of typically Welsh sounds and animal shapes in hieroglyphics).

But the final straw in the brick of Nilotic anger was the news that the Mubarak clan had handed over maintenance of the pyramids to some Welsh cowboys.

The prospect of these tombs emerging from the Griffiths Bros, Builders & Decorators tarpaulin either studded with pebbledash and satellite dishes or brownly glossed into a Toblerone theme park (children and Free Wales Army veterans, half-price), was too much for the Coptic back to bear, and so another country collapses into Cambrian-created chaos.

Borges once wrote a story in which Thoth, the baboon lord of the Nile, joins other ancient deities in an attempted coup against The Academy. But he, like his fellow putschists, can no longer speak, only howl like a beast.

We Welsh may not be much more articulate, so I'd give it a couple of weeks before sending a camera crew back to Pontypridd to ask the newly-arrived Mubaraks how they like the view.
Posted by No Good Boyo at 12:34 pm 25 comments: