Walesffact No.5: Borat is a Welsh 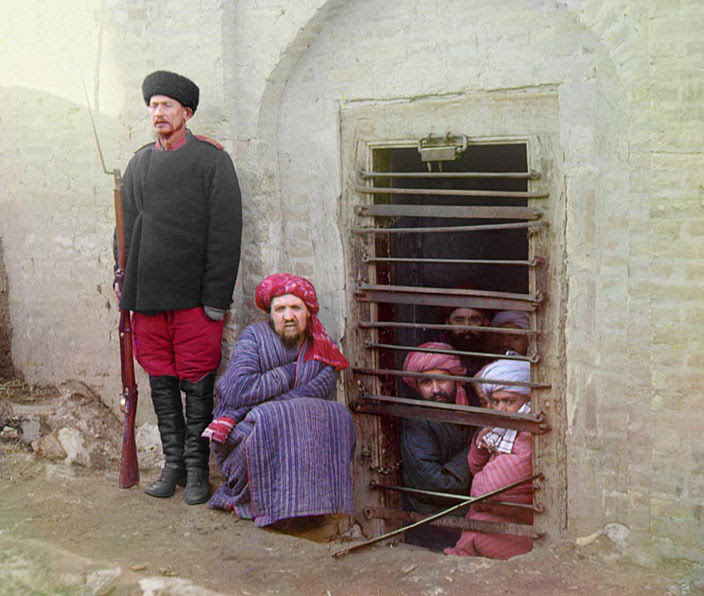 That's right, spudhands, his dad flogged shmutter down Cardiff market and he's as Welsh as a collier in a coracle using a leek to paddle up the Thames to point at the Tower of London and yell "!Welsh!".

Now then, what with the new Borat fillum, there's been some argie and plenty of bargie about his goodwill mission on behalf of the fine, Rorshach-blobby land of Kazakhstan, and much general curiosity about Central Asia.

No Good Boyo had the great pleasure of living in Uzbekistan for three years on a mission to persuade the melon-headed locals not to convert to Calvinist Methodism. I soon found out there was little danger of this, and settled down to an agreeable life of kebabs, pilau, endless sunshine, discreetly friendly begums and the diverting sideshow of virtuoso police brutality and the Taleban as neighbours.

A rigorous regime of defrauding the taxpayer and morning drinking had banished the memory from the mudflats of my mind, but top Brighton DJ, composer and ressurectionist Andrew Carroll reminded me that I'd written a short academic paper on the region some time ago, and so with a tip of the tall black hat in his geomatrically improbable direction I hereby present my other reader (arright, Gorilla mun?) with:

Uzbeks are the Germans of Central Asia. There's lots of them, they spill over borders, they like hard work, lack much of a sense of humour, are very clean, think they should run the region, are plain and hefty to look at, sing the praises of stodgy food in vast quantities, and are cordially despised by their neighbours, whom they regard as a bunch of degenerate nomads and Russian- lickspittles.

The Kazakhs are the Americans of Central Asia. They like wide open spaces, big slabs of meat, crude oil, horses, whoopin' an' a- hollerin'. They are divided into three groups - The Great Horde in the East, which is dominant; the Little Horde in the West, which is innovative and has the natural resources; and the Middle Horde, which sits in the middle of wheat fields and gets jeered at by the rest. They think they should run Central Asia and don't give a monkey's knackers for any of their neighbours except the Russians, whose spit they lickle.

The Tajiks are the Irish of Central Asia. An ancient and cultured people, fond of singing and poetry, proud of their descent from the Persians. They inhabit a small, beautiful country, but are often more divided north against south than they are united. And God gave them a right bunch of bastards as neighbours. They have the strongest trend of religious fanaticism in the region, and are the only country to have had a proper civil war. They know that when they ran Central Asia sure it was grand, and that's good enough for them. There's also millions of them running another country - Afghanistan - and they think they're doing a good enough job of that. They consider their neighbours to be degenerate nomads, but agree with most of them on the urgent need to lick Russian spittle. Their neighbours think they have girly voices and lead the regional pederasty league.

The Kyrgyz are the Welsh of Central Asia. They're jolly, profoundly democratic, and inhabit a beautiful, mountainous country that no one visits and which has no natural resources at all except for some gold and clapped-out mining. They are divided north and south in lifestyle and geographical orientation, and are widely associated with sheep-related activities. They still practice droving, and have the worst cuisine in the world. Their southern valleys are home to heroin connoisseurs. They have never ruled anything, not even Kyrgyzstan, and don't really seem to care. They think their neighbours are soft and that they secretly wish they too were Kyrgyz. Their neighbours rarely think of them at all, except in a comic context, but if pushed will say they distrust them as sly and two-faced. Russian spittle-licking suits them just fine, and hey, Ivan, why don't you buy some of our lovely smack while you're here?

The Turkmen are the Albanians of Central Asia. A good-looking people with a strict code of honour and remarkable social grace. No one has any idea where they came from, and think it unwise to ask. Their language is full of lisping sounds. Their neighbours don't really take them seriously, but wouldn't push the point of actually telling them that to their face. They really like knives, and are to be found wherever there is trouble in the general region, such as Iraq, Lebanon and Turkey. There's no reason why their country couldn't be a going concern given its good location, abundant hydrocarbon resources and small industrious population. Sadly, they are run by a fucking lunatic. Their neighbours feel a little sorry for their having to cope with him, but not as sorry as they themselves feel about having to do the same. The Turkmen are not really aware that they have any neighbours, just potentially new camel parks full of poofs.

(Correction: Mr Carroll is a ressurectionist, not a vivisectionist, as previously reported. Apologies to all concerned, and thanks to Burke, Hare and Thomas Solicitors for pointing that out.)
Posted by No Good Boyo at 11:13 am

Borat can't be Welsh because he's always trying to kiss other men. I don't know much about Welsh men, but I'm pretty sure they don't do that sort of thing in public. Isn't Welsh food called "meat-and-2-veg"? Replace the meat with locusts and it sounds good to me.

Thing is, Borat's only acting gay for the telly. In real life he eats pies on the street like a boy. Hinglish food is normally designated meat and two veg, though I believe the trouser-oriented members of their male community mean something else by that. Welsh food is subject to regular UN inspection, and is either slate- or seaweed-based and not to be taken internally.

Skillipedia said...
This comment has been removed by a blog administrator.
3:47 pm

Who would be the Scots of central Asia? I read once (on the back of a packet of porridge oats at my grandma's in Biggar, Lanarkshire, in late 1971) that there is a Scots-related central Asian nomadic tribe called the McTavishstanis, who forage for sheep droppings and wake before dawn just to suck the leaves of their bargain dew. They forge a crude version of the bagpipe from the extracted stomachs of their enemies, not to play music, but to disguise their inherent flatulence in polite company. Can this possibly be true?

A more pertinent question, Ian, would be who are the Scots of Scotland? In my experience most Scotsmen are just chippy Geordies. Their totems of national identity are sham - kilts were invented by the Rowntree Quakers, Tam A'Shanters are just berets that "Bonnie" Prince Charlie chucked up on, and the country itself is historically a dumping ground for Viking undesirables. As for Gaelic, the Irish invented that. Face it, your just Mock Jocks.

Yes, but we did invent mutton and bridie broth; the short-tempered, ginger-haired midfielder; muttering toothless crones; 'Pass The Haggis', and headbutting. Way more then the Welsh have contributed to civilisation.

My brother and his family are moving to Wales so I have decided to learn Welsh, not because I think I will need it when I go visit but I think it could be interesting and a way to pass the evenings. The problem is I have no idea where to start! Welsh is not as widely spoke as languages such as French and German so I am having trouble locating a tutor. So I have decided that I am going to do it myself online. Does anyone have any experience of learning language online? Is it easy when there’s no one to speak to? Also what are the prices like?

For most recent information you have to go to see internet and on internet I found
this site as a finest web site for latest updates.
Also see my website - bootsausrustung

Every weekend i used to visit this website, because i wish for enjoyment, as this this
website conations truly good funny stuff too.
my web site :: currency exchange

Please let me know if you're looking for a author for your blog. You have some really good posts and I feel I would be a good asset. If you ever want to take some of the load off, I'd
absolutely love to write some material for your blog in exchange for a link back to mine.
Please send me an email if interested. Thanks!
My site ; here

Heya i'm for the primary time here. I found this board and I in finding It truly useful & it helped me out much. I hope to give one thing back and aid others such as you aided me.
Here is my website - Poker

Heya i'm for the primary time here. I found this board and I in finding It truly useful & it helped me out much. I hope to give one thing back and aid others such as you aided me.
Also see my site: Poker