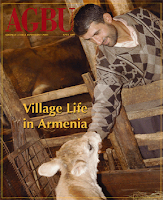 My last post about Armenia has attracted the attention of many parties, ranging from the Sayat Nova Society, the somewhat tautological but nonetheless alarming Armenian Secret Army for the Liberation of Armenia ("We mean Turkey," they admitted), lawyers acting for Steffan ap Sioncs, the School of Slavonic and East European Studies, and a rather forward lady called Millî İstihbarat Teşkilâtı.

With such acclaim and gunfire ringing in my ears, I am happy to present the next chapter of my secret life of Armenia.

In 1986, the group of Russian-language students to which I was loosely attached set off on a trip from the sepia-tinted town of Voronezh for a week of summer sun in Soviet Armenia.

"The blokes will screw you, mate," chortled my room-mate Sergei through his morning moonshine mouthwash. "They're like that down there. Goes back to Roman times." He was studying something in the history faculty, usually the plump Cossack rump of Olga the hostel bike.

Reassured that I wouldn't be lonely, I clambered aboard the Aeroflot air trolley-bus for Yerevan, the Murmansk of the South.

My sympathy for the Armenians, combined with a general loucheness, had drawn me into the orbit of a small-time black-marketeer called Tigran. Nominally a student in the economics faculty, he spent his time trading vodka and jeans in a pleasant wooden house behind Voronezh railway station.

Now, the Soviets had just decided to give Prohibition a chance, on the grounds that it had worked so well in the United States and the Arabian Peninsula seemed a reasonable place.

As a result planes were falling from the skies as ground crews drank the flight fuel, the criminals who came to own the Russian economy accumulated the capital and contacts to get properly organised, factories stopped producing combustible television sets as workers bunked off to source some sauce, and housewives found their weekly shopping basket reduced to a bucket of fermented potatoes and two straws.

In a fatal display of flexibility Moscow had allowed the Caucasian republics of Georgia, Azerbaijan and Armenia to carry on drinking because the locals just enjoyed an odd bottle of wine with their grilled meats. The Slavs, in contrast, had a habit of sticking their heads in a vodka trough, wrestling a pig, bursting into tearful song then collapsing in a snowdrift.

Armenians and Georgians were quick to flood the Russian market with spirits of varying degrees of toxicity, distributed by taxi-drivers, flower-sellers and pretty much anyone swarthy and unshaven on a street corner near you.

To this explosive mix just add British university students of the mid-1980s - a grisly lot at the best of times. The failure of General Galtieri, Red Wedge and organised labour to oust the ghastly Mrs Thatcher had left edjucated youth with nothing to hope for but comfortable jobs in accountancy, foreign holidays, a two-up/two-down in Amersham and occasional wife-swapping.

They squelched about in Dr. Marten's boots, long black overcoats and shoe-gazing fringes, snagging keffiyehs on their CND lapel badges and blinking sullenly at Sloane Rangers through their Lennon specs. 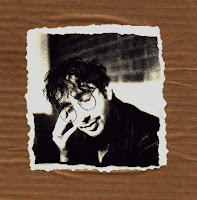 They made themselves feel better about having tolerated Fascism etc by conscientiously objecting to life.

Where was I? Ah yes. This Savonarola tendency kept my fellow-students in Voronezh away from Armenian spivs and dancing-girls, let alone contraband and currency speculation. At least initially. Closer encounters with Actually Existing Socialism slowly opened some of their clammy little hearts and beaded purses up to a New Economic Policy of bartering Billy Bragg t-shirts for booze and cigs. I was happy to help, for an undeclared commission fee.

The problem with a largely unregulated financial sector is unpredictable availability of cash and credit, as we have been finding out of late. The same applied to the Soviet black market, and it happened that my pockets were empty of all but some lint and a list of shady phone numbers as we disembarked at Armenia's euphonious Zvartnots Airport.

Equally uncertain was the itinerary of Young Young Aherne. Aherne had split off from the student collective early on and followed a more proletarian path to pleasure than my own. His great, unwashed room-mate Lukich had introduced him to "viper-pit" drinking dens where men grunt, spit, swear and gargle bottom-melting Zhiguli beer while calling each other "whore" in a lazily threatening manner.

Aherne had steadily acquired the three marks of Satan as far as our fellow-scholars were concerned - a social life unbounded by our hostel, a grasp of colloquial Russian and, worst of all, a grasp of a local girlfriend, when he should have been sitting in his room listening to The Cure and wondering why Soviet sugar lumps don't dissolve in tea.

Arriving in Armenia meant getting to know The Gang all over again, something Aherne wisely decided he'd rather not attempt. I had contacts, he had money. Together we devoted ourselves to some grand bouffery.

I whisked the gurgling Gael off on a tour of Armenian geezers from Tigran's address book, ranging from the Hooch King of Tsaghkadzor to The Fiendish Professor Morozov, a physicist at Yerevan University whose friends at the cognac distillery provided him with enough eau-de-vie to fell the Soviet women's shot-put team. In return Young Young paid for lunch.

Half-way through our trip I sensed his largesse was flagging, and decided to play my last and grubbiest card.

Earlier in the year one of the many girls called Hilary in our group had brough Aherne a bag of French letters back from Britain. He never wasted time on trips home, as these would have interrupted his delicate drinking/mounting/swearing continuum. The would-be Mrs Aherne, on the other hand, was clearly tired of making do with galoshes, the gritty, allegedly re-useable Soviet prophylactics that came in two sizes - too small and too large.

As a practical joke I and a few blades had lifted the condoms from Hilary's bag, fully intending to return them to her amid much relieved laughter and nudging after Aherne had calmed down. But somehow we never did. Hilly assumed she'd left them in Britain, and long agonised over her parents' reaction when they found them on her dressing table. I found this out relatively recently, in a bonus that has done my soul no good at all.

Through a complex series of thefts that remain unexplained, the stash had come to rest in the lining of my ox-blood leather jacket, which on that evening in June 1986 was draped across my shoulders on a balcony in Yerevan's atmospheric Micro Region No.5, where Aherne and I were sampling some of Armenia's primo hash.

"Then allow me to give you an early wedding present," I drawled, presenting him with the sheaths that he'd paid for some months ago, give or take a few.

Even I was moved by his squawks of Papist gratitude. Few were the men who willingly handed over their stack of johnnies to another in the Soviet Union, although he had no idea that I wasn't one of them. I dined like a provincial party secretary for another week, and returned to Voronezh laden with jazz records and kebabs.

"So, did you get screwed, Boyo?" beamed Sergei over his dried-fish and boot polish breakfast.

"Not me, cher Serge, not me," I murmured as Aherne barged past us on his way to the girls' floor, bag in hand.

Boyo, just got in from the Flowing Spring which is under new management not that you'd notice and I can't really see properly, but I will give this post my full attnetion tomorrow because it looks thrilling. I am going on a shoot tomorrow in Hampshire with a famous politician. Imagine the fun! Think of me. XCX

"the Soviets had just decided to give Prohibition a chance..." Oh lordy, is that true? It sounds a sick idea even by Soviet standards.

Well in certain parts of the world sodomy is the preferred method of contraception. The one part of your story I don't understand is why Hilary was so keen to do a man a favour. You should have probed her motives.

Ah, Mrs Pouncer, the Flowing Spring was the usual scene of my 12" extended dance remix lunches in the days when I violated the Sabbath by working Saturdays. Fine Fullers ales and the world's most dangerous junction with the Henley Rd. Good luck with the politician shoot. I don't have to remind you to give him a sporting chance before letting rip with both barrels.

Gadjo's chillingly clinical account of 1980s pipe-aversion was news to me. I recall a consistent and rather gallant over-estimation of young ladies' self-respect on the left. The Federation of Conservative Students made many mistakes in the 1980s, but not that one.

Gadjo, I fear the Dry Law was all true: http://en.wikipedia.org
/wiki/
Prohibition_in_Russian_Empire_
and_Soviet_Union

I remember telling one of our language teachers in Voronezh that Prohibition had led to gangsterism, sickness and absenteeism in the US. "Do you think you know better than the Politburo?" he asked. Well, after Communism, the Afghan invasion, the Aral Sea and that absurd Moscow Olympics bear, what could I say.

GB, I think Serge's reference to Roman practices was not a million miles cubits from what you have in mind. Hilary, despite her name, was a generous soul. The fact that I am still alive and unmaimed is proof of that.

They organised a school trip to Russia at my school...1981; some of the boys in my class did indeed try to sell their Jeans... and they got caught...
Sx

I imagine that wandering trouserless around Brezhnev's Russia was a bit of a giveaway to the police, Scarlet.

A not-dissimilar reason for one of our teachers' being arrested in Moscow the same year...

Luckily they were caught by the drunken teachers first before any harm was done.
Sx

As a stupid in the 1980s I can confirm that every word is true regarding the miserable, NME-lead, woman-respecting lifestyle (except we called it involuntary asceticism). Having a good time was frowned upon as putting you in the same bracket as rugby-loving, totty-chasing, bitter-swilling chaps whose parents had paid their school fees. You can hardly blame the latter for looking at the pathetic trenchcoat-clad lads in collarless shirts reading thick and earnest political tomes and bursting into Tory guffaws while drunken Cecilias got their maws mucky on the peckers of privilege.