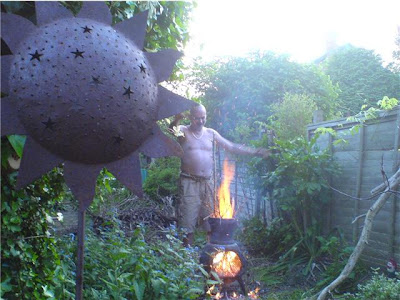 The House of Boyo has been touched by triumph and tragedy in the past week:

Siencyn was able to greet Bendigeidfran before his passing, and our son is at a week old already studying the antient texts that he bequeathed on pillars of slate.
Myn Duw, mi a wn y daw...

A great day for the House of Boyo! May he be a future Prince of his Nation (and scourge of the Pottists who have hijacked the cause). Convey our deepest regards to Mrs Boyo. It's a classy lady who keeps schtum when she's got a bun in oven.

I shall certainly convey your gallant greetings to my beloved Baikonuria, GB. Young Bendi will guide Wales back to the overgrown footpaths where once staggered Siencyn.

congrats me lad, and all felicitations to the young lady!

Great news. No doubt the new cadre will have his nappies made from recycled blog posts.

Hurrah, congratulations indeed, and best wishes to mother and baby!! Expecting to see you soon win the Sweariest and in Welsh too category of the Tots100 Index of British Parenting Blogs.

Thank you all again, yn enwedig it ti, Ffransis. I like the totblog idea, Gadj. Perhaps Madame Boyo could edit her blog to substitute Bendigeidfran for me.

Felicitations, Boyo. I dunno, it might be because I didn't sleep last night, and find myself trying to shake off a heavy one this morning, but I feel moved beyond all endurance. We see our little coterie visited by the events which sum up the human condition: my poor father dies, then a new life is celebrated chez vous, and yesterday Waitrose started stocking Tanqueray Export Strength. Propino tibi salutem!

Boyo! First, well done to Mrs Boyo and you on the birth of your son! Perfect. I will get pissed forthwith. Give me a cigar, quick.
Here’s to you all!
*lifts red nose white charity wine to lips and sucks glass dry*
Perfect. Bloody marvellous.

Next, R4 paid a visit to Cavers ham the other day on Roger Bolton’s programme. My ears were pricked. ( a congenital condition). Did I hear two sniggering monitors in the background pissing the license fee away writing scripts for Welshman-man? I think I fucking did. They glossed over that one. Your director said the place was full of very talented people monitoring the world who then digest and report and always with a straight bat. Having met you all, I looked out the window to hide my embarrassment.

Against this, Jonathon Ross seems worth the money. Not.
Good fortune to you and your family.

I look forward to the Welsh version of Dynasty, with less shoulder pads and more slate / sheep.

Though I have seen you and added my congratulations/condolences personally, I thought it arguably worth posting them on here if only to confound rumours of my disappearance.

Thanks again, one and all!

Excellent news about the Tanqueray ES, Mrs P. It's my gin of choice for the construction of the perfect martini - one of the many tastes I have in common with Mr Sean Combs.

Maroon, I missed this piece of propaganda but will try to find out what gave. "Feedback" always strikes me as lacking in Maoist self-criticism, and this episode was clearly no exception.

Gyppo, never confuse rumours with a conspiracy of silence.

The family are doing well, and Mrs Boyo intends to write about her experiences on her website now that "Mother & Baby", "Take a Break" and the "Bjulletin Anormalnyx Doslizhen" have rejected her article.

Ah, Max Boyce: our dark hero. There's an entire pamphlet to be written about him.