The gleanings of thy harvest 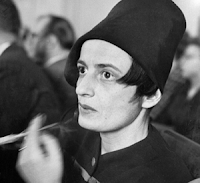 Some readers will have surmised that charity in every sense of the word is a rare visitor to the House of Boyo. This would be a mistake. Our commitment to the Laws of Moses shines through in weekly acts of tsedakah:

Readers would be right, however, to conclude that we have little time for the current crop of charitable organisations. I tend to agree with a colleague who favours only two petitioners with his largesse, these being the Royal National Lifeboat Institution and The Salvation Army.

There's something comforting about knowing there's a big boat full of big men somewhere out there, and the Sally Army is a sort of insurance policy for any keen drinker with an impatient wife.

We feel that the task of the blogger is not to jeer at more socially-attuned people but rather to drag them down to our level, and so here is the No Good Boyo wishlist of charities:

1. Oxfemme. This organisation seeks to guide Oxbridge gals like Gail Trimble out of their blue stockings and into garments at once more complicated and yet much flimsier. Chief Executive Officer: Mrs Pouncer.

3. Waugh on Want. Dyspeptic High Tories rove the wretched places of the Earth - The Levant, Afghanistan, Kurdistan, Scotland - telling the slovenly locals to shut up, leave the livestock alone, read some hardback books and restock their wine cellars with decent but affordable claret.

4. Scopes. A group that campaigns to put the word "monkey" in front of most nouns on the grounds that this makes them instantly funny to the student community. For example: monkey tennis, monkey priest of Killybashangel, monkey nut, monkey puzzle and monkey man - low-hung or otherwise.

5. The Society of St Lynsey de Paul. A schismatic Catholic sect that venerates rather than condemns The Blessed Lynsey's 1970s recording career as one of the Seven Dolours of the Modern World. They run an Internet radio station that pledges to play "Won't Somebody Dance With Me?" over and over until The Vatican gives Cricklewood the same pilgrim status as Santiago de Compostela.

6. The Alex Higgins Trust. "The Hurricanes", as its members are known, are a band of Irishmen who seek to teach bookish homosexuals the virtues of drinking, smoking, billiards and the Ulster Fry.

7. Shelter-Skelter. Traps homeless people in cellars and makes them listen to rants about the secret meaning of Beatles songs.

8. Human Kites Watch. A dinner-party campaign to return Iraq and Afghanistan to the kite-adorned contentment that they enjoyed under Saddam and the Taleban. Patron: Michael Moore.

9. Interpal. Worldwide association of the "nice" halves of the "nice copper/nasty copper" partnership. Offers cigarettes and friendly advice to people who've just been thrown down a police station staircase in a sack.

I am happy to gather any contributions readers might want to make to these charities pending their establishment. Cheques and postal orders can be made out to "NGB" and sent to Banco Boiano, Skomer Island, Wales.
Posted by No Good Boyo at 8:34 am

"...the Sally Army is a sort of insurance policy for any keen drinker with an impatient wife."So this is what you've driven the poor woman to. Shame on you, Boyo!

Francis, the only place I've driven Madame Boyo recently is her milliner's and, of course, the local temple of the Esoteric Order of Dagon for young Bendigeidfran's branding ceremony.

If Lynsey de Paul gets one, so should Gilbert O'Sullivan. I'm surprised not to see a charity for Welsh slapheads with Neill Kinnock as its CEO.

A charmingly humane post, Boyo, and a credit to you.

I always conflate the RNLI and the Sally Army, and have been known to send the wrong cheques to each. One too many screenings of Stubby Kaye in Guys and Dolls.

There's an excellent limerick to be written on the RNLI and the Sally Army.

Is your pic of Siouxsie Sioux? She is the most amazing singer.

RNLI and Sally Army both possess flags and uniforms. Coincidence? Or perhaps you have betrayed a certain fascination for the militaristic? The precise positioning of your bobble hat may have already given you away. Question: were you ever in the cubs?

GB, the charity you dream of was once called the Labour Party. Alas, Welsh windbags are no longer needed. I'd give Neilo space on my web blog if his big, sausagey fingers would fit on the keyboard.

You're right about Gilbert, too. What with his paedo-friendly anthem "Clair" you'd think the clergy would love that.

Perhaps the RLNI could become the marine arm of the Salvation Army, Kevin. And Inky could write their joint marching song. The pic is indeed of Siouxsie, in her Manhattan period.

My Mous, I was in the Cubs for as long as it takes to find out you have to take an oath to Old Ma Windsor. My love of uniforms has since been transfered to the black hemp of the Rouge.

Take your time, Clarissa. Or ask a beau to open the bottle with a slice of his sword.

The Count of Monte Cristo in a Bubble Car said...
This comment has been removed by the author.
10:02 am

Well, I believe that charity begins at Ohm; I call this precept Ohm’s law. And in keeping with this resistance to charity, inversely proportional to the currants in any freshly-baked fund-raising tea bun, I tend to drop tiny colour-coded electrical components into any charity box I encounter rather than money.

But all this talk of matters eleemosynary reminds me of an incident involving my ballet teacher in Tirana, in the late 70s. One particular afternoon, I had a somewhat dyspeptic disagreement with her; this was largely a result of me being told that my plié was “not up to scratch” as well as being apprised of the fact that performing to a cassette tape of Carly Simon singing about “clouds in her coffee” (rather than some revolutionary paean to Comrade Enver Hoxha) would be considered to be somewhat selcouth, if not downright counter-revolutionary, by the powers that be; and that their response to such “rock-and-rolley” (as they put it) would be less than charitable.

Your Excellency, that is how North Korea began to assemble its nuclear programme.

I'm surprised you didn't give the Royal Society for the Projection of Bards a mention, Boyo. They make such good projectiles.

(Excuse me Boyo.) Oy, you count, I clicked your link and there's no cuffing blog there. Please rectify soonest.

Couple of rather sick ones, my apologies etc...

Amnesty Splinter-National: the breakaway group that denouces the aims, sincerity and accountability of its parent organisation.

The Professor Higgins Trust: On discovering that a chap has contracted an unmentionable disease the dear professor exclaims "By Jove, I think he's got it!"

Excellent, Gadjo! I've been racking my brains and my colleagues for a variant on Amnesty, and you got it.

Another has occured to me:

Bleedin' Liberty - committed to upholding the civil rights of Cockneys through the advocacy of subsidised eels, special black-cab routes and the deportation of all immigrants.

A message for Uncle Davey - great to hear you're around. Drop me a line at ceidwad@hotmail.com and we can catch up. I recalled one of your linguistic triumphs here:

Simon, I'm considering remaking the Hitchcock film as "The Bards". A worthy successor to "Cynan The Silurian".