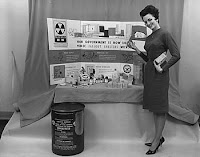 "It's butter!"
Any the wiser? Neither am I.
Wanker Ashman told an interminable joke one dinner in college, and my mind went forth to slay approved dragons and weave baroque fancies of the érotique half way through.
I returned from Cappadocia via both of the girls out of Strawberry Switchblade in time for the punchline, with which I began this post.
Pride precluded me from asking Wanker to explain, so I've spent the last 28 years haunted by what John Paul II's dairy dilemma had been (while hoping it had nothing to do with choirboys and Last Tango in Paris).
The same thing happened today. I lapped into The Tethered Goat at 1630 sharp to take delivery of my quart of Champion's Speckled Johnson, only to hear our local barrister end an anecdote with the scholarly flourish: "... but I have told a donkey to fuck off!"
Cue gummy guffaws from the assembled rustics, but I'm frankly baffled by this rhetorical pay-off. What was the feed line?
The last might be the key to the puzzle, but I was too aware of how the nearby village of Gallowstree Common got its name to distract my quaffing companions from their pewter pots of Abdication Special.
This prompts me to propose a new department of state to this Great Coalition of Ours. I know we are meant to be minding the exchequer and what have you, but frontline public services are a top-shelf priority.
Never mind hospitals and edjucation, I'm talking about re-establishing bonds of respect across the generations and passing on ancient lore from elders to young striplings. We need a Department of Retrospective Anecdote Completion.
This institution would soon replace the National Health and the chaps who leave porn mags under hedges in the public affection. It would not only benefit confused middle-aged drinkers, but also bring slack-trousered youth into the snug bars of Britain to ask their bearded betters about the one that ends "and there was a piece of sweetcorn on the end of it".
Before writing to Theresa May, and not anonymously this time, I'd like to gather some more examples of stories whose punchlines dawdle in the marshalling yard as the set-up and elaboration steam away. Apart from the three cited above, can you Cymru Rouge cadres and fellow-travellers alike think of any others?
One that still nags me in the small hours is "Thank you, Mother Superior, but these Fokkers were Messerschmitts!"
Answers below, please. In the meantime, here's some music:
Posted by No Good Boyo at 6:48 pm

There was an example of this in the the Australian film Don's Party. Don's friend Mal said "But you have suck one cock!" (or words to that effect) in an Indian accent. Maybe a punchline like that doesn't require a joke. Sadly, the actor Ray Barrett died last year.

Don's Party is a fine film of calibrated drunken disintegration. Thanks for the reminder, I must seek it out again, if only for the gag. I wonder if similar scenes accompanied Labour's demise here in Britain this month?

...they have three and a half inch floppies!
Sx

Brilliant innovation. Why not press it further by inviting comments on a post which once there are, say, a dozen you will go on to write. Avant garde that.

Where's the soap, doesn't it?

I once had to write a German composition with the final line "Es wird wohl Seife gewesen sein." ("It will, I suppose, have been soap"). Can't recall how I handled it, but it was way more fun than the usual stuff about the crisis of the generation gap caused by asking what dad and grandad did during the war.

Lady, gentlemen, these are all fine suggestions. Keep 'em coming and I'll compile them in a petition to No 10 Downing St.

Let's hope that Mr Cameraman, as my daughter Arianrhod calls him, is more amenable than grumpy Mr Brown, who didn't like my National Fenella Fielding Day:


We're off to Ukraine for a couple of weeks tomorrow. I'll try to check in whenever the goat down the farm can get the spinning wheel modem up to speed. In the meantime, be good.

This is a common motif in detective dramas. The sleuth will be wanting to talk to some lowlife who's holding court in a drinking establishment. Said lowlife will be finishing his joke... "and the waiter goes, But you said you wanted the Peking duck!"; cronies will howl with laughter as lowlife turns with cocky contempt to the cop. "Can I help you, officer?"

My favourite joke is the one about the man with an orange instead of a head. Remind me to tell you it sometime if you don't know it.

The answer to this will inform debate until 55% of MPs decide they prefer Persil.

Brit, I'm not aware of this drollery. Enlighten us.

Inky, Cameron will soon learn that the Rouge understand "public" as in "execution".

Back in the days when I was a starving writer I used to populate the background rhubarb with stuff like this. If memory serves:

Elderly cleric to outraged flapper: "It must be your feet then."

Gustav Stressemann to Arthur Henderson: "you could put bells on it and say it was a Christmas tree but you'd still have to pay the magistrate five shillings!"

Seaside landlady: "he used to, but then his braces shrank."

I think I get a feel for why I starved...

Man with an orange instead of a head says: "Ah, it's a long story. One day I was on the beach when I found an old lamp. I gave it a rub and out popped a genie who gave me three wishes."

"That sounds great, but why do you have an orange instead of a head?"

"Well what happened was, for my first wish, I wished I was the world's richest man... and POOF! suddenly tons of cash and gold everywhere."

"Brilliant. So why do you have an orange instead of a head?"

"Well for my second wish, I wished I had the world's most beautiful woman as my girlfriend... and POOF! There she was, a stunner."

"Okay, great... but why do you have an orange instead of a head?"

"Ah," said the man. "For my third wish I wished I had an orange instead of a head."

I was involved in an incident that ended with the gay call-centre worker saying:

"It's the yellowest halibut in all of Burundi, Captain."

Thanks Brit, that's worthy of Becket.

Excellent stuff all round, you chaps. I wonder whether there's a grid one could design of foodstuffs/animals/clerics in unsuitable settings that make a good punchline.

Glen Baxter collected comments from fellow bus passengers to inspire his cartoons. A few he never got round to using were:

"So the doctor said 'it's no good to you anymore' he said, 'leastways not as a leg it's not'."

The question you are looking for is: Have you ever shoed a horse?

Thanks Anonymous, if that is your real name. I'll nominate you for the Department's crack squad of humour facilitation operatives once Mr Cameron has approved the petition.

No Good Boyo - the blog that gets results, albeit with some delay and not necessarily the correct ones.

Please could I nominate Brit for some sort of a prize?

I hereby award Brit the Charred Lung of Llwchwr (III Class), the highest award a non-Welsh can receive from the furry palms of the Cymru Rouge.

The highest award for a Welsh is of course martyrdom!