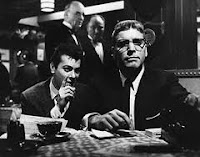 Chwarae teg, Cymrawd, the Groan fucked over St Julian of Melbourne good and proper, so not all bad, eh? And besides, bongs cannot be full of wrong, by definition.

Terry-Thomas was a pantomime villain, but he wouldn't have been caught dead or incontinent with a North Vietnamese flag. He loved the Americans like Caligula loved Incitatus.

I remember Stuart Hall hooting his head off when the European referee mentioned the number of "breads" each term harvested on Jeux Sans Frontieres.

It was indeed good to see the Graun did so, but as usual it was by accident for they had agreed to sup with the Aussie adolescent in the first place.

If he'd offered his sloppy seconds to this web blog I'd have sent him backing with a copy of Hitchens's memoirs and a Royal Wedding mug.

Bongs are a morally neutral vessel. Filled with Persian black they are a joy unto the world, but I would spurn one brimming with Earl Grey.

Apropos, some Danish neighbours came around the other day and the wife poignantly told me she thought the English only drink Earl Grey. I put her onto Glengettie right away.

GB, I was simply conjouring a image of maximal horror in terms of its impact on the Special Relationship, rather than suggesting that Tel might have behaved like a frightful shower. Sometimes you've got to push the boundaries, even in cricket.

I've long admired Prof Hall's cultural studies, but wasn't aware of his work on It's a Knockout. Duly humbled, I shall return to my library.

Don't talk to me about those Ras Clart at the Grauniad. They said I wasn't ethnic enough. Fucking cheek.

What were you offering to do for them, Joe, and why do I get the feeling I may regret asking that?

If it is controlled by the Welshes, they've found a brilliant frontman - is there anyone alive who looks more English than St Alan of Rusbridger?

It was some "new ethnic writers" thing. All the black boxes and Asian boxes had been ticked so I went in as North American Native. See what the KKK did to Granny's Granny?

It's true, Gaw, that St Alan is the open, eternally disappointed face of Liberal England. Like a semi-skimmed Savonarola, he laments our weaknesses without having the fire to fight them.

If we should ever emulate the Tudors, or the entire Scottish political class, and take over British politics, he would be the Austen Chamberlain to our Lloyd George.

Joe, you should have mentioned the Mandans. You'd have been a clog-in at BBC Wales.

Don't get me started on Mandans! I looked into it. No blue eyed Welsh speaking chapels in North Dakota.

Mrs. Pop, who is German, once applied for work at The Guardian, and received a reply telling her that they only gave jobs to "indigenous" candidates. We still have the letter to prove it. In fact we should have unearthed it during the risible Clark County campaign, which remains the only time I've ever felt empathy for gun-toting rednecks.

I try hard to like The Guardian. It has an excellent website, it's making life difficult for that snake-oil merchant Assange, and it tries to report on foreign affairs while most of its competitors have given up. But it's just irritating.

Frau Pop ought to have told them she is indigenous in Germany, or are they racists akchooly akchooly who haven't forgotten the War. She'd be editor by now, for what it's worth.

Poor old Guardian. Worthy... but dull, Boyo... Haven't read it in years - in my local real ale boozer here in the East Midlands, one sees the local retired (from alcoholic excess for many) teachers, social workers (lord bless 'em) and scruffy adherents/remnants of the clp (their last bastion on the journey from IS/CP/WRP as the years went by, coming in clutching some new compilation cd of yesteryears' prog rock) all sat over their pints engrossed in this worthy (but dull) publication. Occasionally one will stir from their beer-induced sloth to wave a copy and point at it to other devotees - sorry, comrades. A bizarre spectacle... usually signifying the latest words of shared faith from such as George Monbiot or our dear Polly. As a drinker of strong continental lagers on the main which unfortunately provoke me into supreme waggish windups, beyond flaunting my South African Afrikaaner heritage for maximum abuse and amusementy, I have found myself turning into a strong Sarah Palin supporter of late. They don't like it up 'em... Re bongs - ah, if only... slight breathing problems these days inhibit my use of these superior pieces of equipment... jeez, where were we? Oh - fuck the Guardian and hooray for Terry Thomas... Stuart Hall admittedly an acquired taste... did he not end up on obscure late night quiz shows? He is/was the culture bloke, isn't/wasn't he?