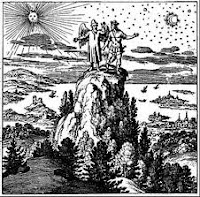 This week saw the anniversary of the Penmachno Document, by which the True Prince of Wales and Owl of Aberffraw, Madog ap Llywelyn, granted a sod to my crested ancestor Ystlum ap Llewpart Goll, four rods below the forest of Calahir just off Ynys Seiriol.

Because of accretions of mulch and poetry since 1294, it is impossible to dowse our plot's exact location, although each year the local, decayed branch of the House of Boyo proceeds there bearing a kinked Radix Jesse to beat the imagined boundaries around what is now the Trwyn Du lighthouse.

In truth, December is a typically cruel month for Welsh monarchs. Madog had to treat with my leprous forbear on the shortest day, and his stormy predecessor Llywelyn ap Gruffydd was cleaved in two at Cilmeri a week and twelve years earlier.
Llywelyn's grandfather was Llewelyn The Great, a hard act to follow, and the boy had to settle for the dismal title of Llywelyn the Last. Some English types, or possibly their Welsh proto-New Labour hirelings, cut off his head and paraded it around London until its constant arguing and harmonising began to turn the milk sour.
Although there is no evidence to prove this, the royal head was eventually sent to Ludlow's experimental Close-Contact Constabulary College and used to teach Marcher watchmen how to identify a Welshman by palpating his crown.
After catastrophic casualties and a few scandalous elopements, the sheriff reverted to the more reliable method of having watchmen ask the suspect "how are you?". If the answer continues beyond the 20-second mark, pike him.
On the 700th anniversary of Llewelyn's royal rending I was plashing through the wintry rain to an early-evening seminar on the Medieval Body Politic at University College, Swansea. I was in a sombre and thirsty mood, as both the weather and the hour cried out "pub!", where the college branch of the ultra-nationalist League of the Cousins of Rebecca's Daughters was holding its annual wake for Our Last Rudder.
I went to the seminar anyway because of my admiration for the mind, manner and moustache of Professor Sydney Anglo, its chairman. Dr Anglo spoke Cockney Baroque and looked like Napoleon III with Savoy in his pocket. That surname didn't help my excuses to the Cousins, and sharpened suspicions about my Cambritude already half-aroused by my bald cheekbones and filtered cigarettes.
Young scholars paddled into the room, shaking out fringes and flares (we had a lad down from Lampeter). Dr Anglo scattered slabs of Carolingian minuscule about the table and set off on his anabasis about the tripes and tendons of the early European state.
I was gazing out of the window as scrawls of lightning sketched out mountains in the night sky. Suddenly Dr Anglo addressed me: "And what of the head, Mr Boyo? The head?"
"The Prince is the head of the body of state, the 'corps estat'," I managed "As Christ is head of the 'corpus mysticum'. A subject, as a mere digit of the body, must rise at the Prince's command to defend the regnum, just as Christ, via His Vicar, commands the soul."
"So what duties does the Prince, as head, have to the rest of his body?" asked a nearby blue stocking.
Dr Anglo, with a clear nod to Ernst Kantarowicz, noted "Mr Boyo is racing ahead of the lances with his 'corpus mysticum', which Carolingians would have taken to mean The Divine Host, but he has accurately weighted the seesaw of state, Miss Bensberg. As Christ died for the sins of Christendom, so should the Prince be ready to sacrifice himself in battle for the common weal."
"A simple parallel - Christ and the Church, the Prince and the State?" probed Miss Bensberg.
"Not so," I countered. "What if John of Salisbury had been sensitive to pagan passions still pounding through the P-Celtic pustules below the Saxon surface? Perhaps the Prince is a worthy sacrifice, but must that be in battle?"
The rain beat a steady, ever more insistent tattoo on the frail window frames. Dr Anglo gestured to me to continue.
"On this night the Romans marked one of their Agonalia, to Sol Indiges. With Wales crumbling through his twelve fingers, might Llywelyn not have fallen victim, or perhaps submitted, to the call of the Old Religion?

"As the Sun faded in the wintry sky, did a band of Anglesey islanders seek to summon Summer with a more terrible sacrifice?

Was Llywelyn's last vision not that of an uncomprehending Norman sword, as often thought, but rather a sleek Silurian sliver of slate, a dagger dedicated to the gods of the orchards and the fields?" I concluded.
The thunder passed, leaving a static silence. "A most particular interpretation, Mr Boyo," Dr Anglo noted. "Any sources you might want to cite? Of a non-cinematic nature, please?"

The exchange of smiles around the room stopped when our Lampeter visitor opened his notebook and read "'Fight for your patria and suffer even death for her if such should overwhelm you. Death itself is Victory."

To Dr Anglo's raised eyebrow he added "Saint Dubrick of Caerleon, writing some time after Llywelyn's defeat, or should we say with the saint - 'Victory'?"

Dr Anglo cracked his knuckles and snorted towards the skerried skies. "To summarise, my Gwalian gentlemen, you are suggesting that Llywelyn II did not die in an English ambush, but was happily dispatched by his fellow Welshmen so that through his blood sacrifice Wales might live?"

"Still here, aren't we, despite everything?" I muttered.

"Hmm, a thesis indeed, and with your living evidence before our eyes." grinned the professor. "An historian must not of course let himself be led astray by such, ah, 'heady' speculation!"

On that note we set off for our various digs and burrows. I shared an Embassy under the eaves with Bell-Bottom Boy. "What do you think happened to Llywelyn's body, then?" I asked.

"The essential Saltes of Animals may be so prepared and preserved, that... a Philosopher may, without any criminal Necromancy, call up the Shape of any dead Ancestour from the Dust whereinto his Bodie has been incinerated," he recited.

"Cotton Mather's 'Magnalia Christi Americana', after Borellus," he whispered, before hunching off into the rain.

The following morning I turned on Radio 4's "Today" programme to hear court Welshman John Humphrys relate that, during the previous evening's storm, a fireball had torn down the valley from Cilmeri and skittered out to sea like a wheel of Greek Fire.

"Perhaps a little less saltpetre next time," I noted in my diary, and went back to sleep.
Posted by No Good Boyo at 3:55 pm

What I love about your posts, Boyo, is that I don't understand a damn thing.

To misunderstand is to love. Wise words, Daphne.

The Owl of Aberffraw! I love the way you Welsh give your nobles titles that would pass for insults in England. Billy Bunter, you will recall, was The Owl of the Remove.

I've recently discovered that King Henry VII of England had a Welsh Uncle called Jasper Tudor. Was he a comedian?

He was no laughing matter, GB, but by repute he played an excellent joke on England by siring an ancestor of Oliver Cromwell.

That Prof. Anglo really does seem to exist, and to be involved in some society for promoting 'Mediaeval Martial Arts'. I used to know some fellows from the Norse chapter of this movement, and feel sure that the Welsh must also have their own noble method of parrying an assailant with a ridiculous rune-inscribed stick.

Not only does Prof Anglo exist, but the seminar, storm and the fireball did take place on that very night in 1982. Some of the implied links and necromancy may or may not have occurred.

Whenever interlocutors appear impressed with some aspect of the English aristocracy I let slip - subtle, like - that I'm descended from Welsh princes. People are often so impressed that they can't help but step away from me. Anyhow, I reckon it's got to be true (in my case, and that of every other Welshperson).

Lovely Christmas ghost story (even if it's one for all time).

via Cotton Mather or Lovecraft ?

I'm of the Glamorgan Morgans, Gareth. The Normans captured our castle at Oystermouth when we alone responded to the local prince's call. They took one look at it, pulled it down and built a proper one. Mrs Boyo tries to do the same with the rest of our property. Glad you liked the story - it's my annual offering.

Lovecraft thought it was Borellus, Laban, but it seems to have been Cotton Mather. The Sage of Lampeter did not lie. Any homage to Charles Dexter Ward is entirely intentional.

I wish I new half the things you guy's have just sitting in your heads. I need to read more.

Nice to see you by here! Anyone who keeps a close eye on squirrels is ok by me.

I have had encounters with these fluffy terrorists, and came off the worse:

Off topic: on that Odessa subject:

Oy, a shandehoys! The power of Odessa overwhelms the beardy trannies!