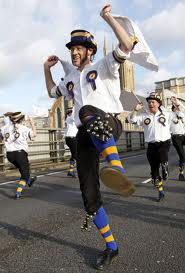 The clock struck eleven yet again as Jethro Gill shouldered his way into the British Film Institute. It's now called Old Peculiar's Pelicular Panopticon, he had to remind himself. And it was only nine-thirty on a damp March morning. "A trifle inclement," as the wireless had chuckled in Banter - the new English standard.

It was always eleven o'clock - opening time - since the Great Shiving. Getting used to the lingo was only the half of it. Jethro reached for a cigarette, only to realise he'd left his stash at home. Since the Shiving only pipes and roll-ups were allowed, and a cigar on the wife's birthday. The me'm-sah'b, Her Indoors.

"Briars and rollies - the whole country looks like a Cornish town council," Jethro muttered as he rifled through the in-tray.

He remembered the revolution well. It had all happened so suddenly. The last pub in Henley had put up its shutters in the face of a thirsty party of Thames walkers, just as a Community Patrol officer was telling a joiner outside a Bermondsey bookies to put out his Benson.

The resulting riots spread nationwide. The shires, suburbs and inner cities marched on Westminster, the politicians fled, and the people stood bewildered and triumphant. The triumvirate - Clarkson, Lumley and Vegas - had time only to design a coat of arms for the New Commonwealth (a Jag hub cap, with pitbull rampant and can and ashtray gules, motto "Circum Tuum") before they fell to squabbling.

Then came the "Sallying Forth", as the chap with the plan, the CAMRA Man, launched the Great Shiving. Soup-stained Savonarolas of the Campaign for Real Ale exploited the national binge and endless smoke-ins to seize the gutted shell of the Mansion House and total power.

Tribune Joanna Lumley alone survived as the figurehead of state, wheeled out on Jerome K Jerome Day to smash a cask on the hull of a new naval skiff.

The rest was a nightmare, a nightmare of horror. Jeans were banned unless elastic-waisted, all lager was drained into the Thames, filter tips, trainers and shaving kits were thrown on the bonfire of the vanities in Trafalgar Square.

Within days all the good-looking women had fled to Wales before the punishment battalions of dieticians and flatscreen TV salesmen were forced to raised Offa's Anti-Taff Defence Barrier high into the Marcher sky.

England was no longer England. Now it was Camrastan, a chillingly jocular epithet intended to "win over our Mohammedan charges to the ways of the wort". You couldn't laugh anymore, you had to "chortle", "titter" or "guffaw". Doors didn't open, they were "portals" to be "negotiated". The profiles of Pratchett, Tolkien and Felicity Kendall graced the new Guinea currency.

Even buying a pint of "cooking" was like sitting an extended oral exam for your Masters in Halitosis. "Special" and the maltier brews were reserved for the Old Campaigners - the CAMRAts as the malcontents called them - and the dreaded Porter Police.

Jethro shuddered, and turned to the flickering Amstrad with its fashionable tweed trim. His job was to bring films into line with Campaign teachings. No lager, no grooming and no girlfriends, unless they were chaste and mumsy barmaids.

There were technical teams tasked with etching beards onto Bogart, cutting Grace Kelly's highballs down to halves of shandy, and curling Private Walker's Woodbines into Bent Rhodesians.

Jethro was a writer, and had to recast dialogue to accommodate tepid ale, flannels and cricket in every imaginable plotline, while excising references to non-comic sex. This proved surprisingly easy with most British films, and hardly needed doing to anything before 1954, but Jethro took grudging pride in his adaptations of the French New Wave and Italian Neorealists.

But Jethro knew his time was up. There, at the top of the pile, was his treatment of "Ice Cold in Alex". He had agonised over it for days, but could find no way of persuading even the most anoraked frothblower that the Desert Rats would have yomped through Libya, eschewing all that Afrika Korps beaded Pilsener, for the promise of a cloudy tankard of Champion's Speckled Johnson.

With a reflective "Fuck this", Jethro rolled up his radical reworking of the John Mills classic as "Warm and Soapy in Suez", a 70s sex romp, jammed it in the pneumatique and stomped off down The Tethered Goat.

The Goat looked like any Camrastan ale house. Walls as jaundiced and uneven as the landlord's teeth, faintly amusing notices to the toilets, a bar pocked with men in broken spectacles peering through the murk of their pintpots at some point below the barmaid's chin, and an aroma of dog and slipper tainting the Burley fug.

Jethro nodded to the barmaid. "Pint of Johnson?" she asked. "The Abdication Special," he wheezed. "I'll need to check the cellar." She left the bar and unlocked a door tucked away behind a screen. Returning a moment later, she said "It's off". Jethro nodded and, while no one was watching, slipped through the unlocked door.

He rapped out the "Satisfaction" riff on a mildly disturbing amateur portrait of June Whitfield. The eyes came alive, and a bloodshot glance took him in. "Grolsch!" Jethro hissed. The portrait slid aside, and he stepped into The Fist and Fury - Soho's most notorious lagerama.

Glass, smoked chrome, prawn-homage crisps and every variety of lager, from premium to pig, came at him from all corners. He lit a proffered Lambert & Butler, necked a Budvar and drank in the scene.

In the corner was an illegal feed of Scottish MTV full of Shakiras for the youngsters. The only drawback was poor soundproofing, which meant the jukebox was silent. But at least he could watch the vids - Clash, Stones, Jam, Oasis and Idol. And all the birds were still slags.

Then a Boadicean prow crested the waves of crop tops and cock jokes. Beach bleached hair framed 70s blue eyeliner, Caligula lips and an embonpoint you could eat your breakfast off.

"I call them my Full English," she breathed, "And you just drank my beer". She opened another bottle on her navel. "Want to try that again?"

Jethro and Marianne awoke on a bed of crisps. "Oh Jethro, I thought I was a lesbian until I met you!"

"No doubt," he grunted, dragging himself across to her record collection. Disappointment. It was all CAMRA approved bumptious hilarity - skiffle, Flanders and Swann, Your 100 Best Tunes, Macc Lads. Then he tugged out the vinyl itself - Cockney Rebel, the Kinks. He nearly wept.

"What did you do before They took over," Jethro asked, balancing his head on her breasts.

"I ran my own boutique," she sighed, drawing deep on her Silk Cut. "South American fabrics, Mayan calendars, panpipes, bowler hats, that sort of thing. Then the Board of Trade came round and restocked us with pre-frayed cardigans, Goblin Teasmades, meerschaum pipes and pomade. I kept the bowler hats, but sold up once they ran out."

Jethro mused that CAMRA wasn't wrong all the time.

"I've been sort of drifting since then," she continued unbidden. "I do some black market highlighting, the Belfast lingerie run. How about you?"

"I've just burned my bridges," he began. "Proposed turning a grim Brit war film into a saucy romp. Well, it did have Liz Fraser in it."

"That was 'Desert Mice'," Marianne added. "You mean Sylvia Syms."

Jethro felt clammy. He tried to sit up, but the breasts held him fast. "How did you know I was working on 'Ice Cold in Alex'?"

Marianne paused, then released him. "Don't worry, they just want a word, that's all."

The bathroom door creaked open, and in ambled a Porter Police patrol in crumpled corduroy. "A beard in your earhole, old chap," grinned the commander.

Jethro stared at Marianne. "I'm sorry," she sobbed. "But they had Baileys."
Posted by No Good Boyo at 11:35 am

Hail fellow and well met! A fine and amusing offering, and mine's a pint of Stumbling Badger, if you would be so good, stout yeoman of the bar!

Indubitably, my liege. May I remind you of the previous juncture at or during which we quaffed a measure of that unstready mustalid? It was, I believe, at the Blazing Festival, Ludlow. The landlord's name was Cadwaladr, as was that of the representative of the local constabulary.

What a dystopia! I'm surprised that Essex is not the heartland of the Tollyban.

ROFLing, and I didn't understand the half of it. The other half was bloody funny though.

You mean the campaign for real ale are still campaigning 40 years later? When are they going to admit defeat? I don't see what Felicity Kendall's got to do with it, she was famous for her arse rather than her drinking habits.

Like Orwell, Jams, I think that if there was hope, it must lie in Essex.

Thanks Daph! I'm thinking of pitching it to Radio 4, but will have to make it less amusing.

CAMRA is still doing a good job of keeping strange men away from railway platforms, GB. Notice how trainspotters have declined since the rise of the Ale.

Do you have a wire tap into my local?

The trailing sleeves of the Welsh have a long and fraying reach, Rod.

The treble whammy is the Camra Crew, the local steam train trust volunteers (known to us cynics as 'The Railway Children') and the Narrowboat Navy. The town I live in is on a ley line stretching from Burton on Trent to intersect with the Grand Union Canal and the resurrected Grand Central line. One of my locals accommodates the above Unholy Triple Alliance although usually and mercifully not at the same time. The space time continuum could be disrupted by such an event - probably helped along by the flatulence levels rising too rapidly...
Sipping my German wheat beer earlier, I thought at one point that this event had occurred but it was only two out of three. Noise levels rising considerably when the Welsh contingent arrived from the pub down the road with the big screen, loud and celebrating a victory of some sort.

The horror, the horror!! (though it's almost worth it just so's we can be shot of 'lager' once and for all.....) But you forgot the home brewers (like my father), Boyo - the revolutionaries in pre-Camra days, mashing up bucket fulls of illicit Old Scrotum's Inscrutable in the cupboard under the stairs. In your new world, however, I suspect that their love of defiance will triumph over their love of beers with dead ferrets floating in them and they'll become the lager-smuggling outlaws you seek.

Yes Rod, there was some sporting glee yesterday, although whether it was because we won or because Ireland lost to England on St Patrick's Day I couldn't say. Celtic brotherhood rarely trumps Schadenfreude.

I've been thinking of brewing my own, Gadj, as I have the requisite shed. Mrs Boyo may have an opinion, one that she may choose to express in percussive form.

Get in touch anytime, my friend.

I've a base back in the UK now.

PS: Is that a pint of Guinness in your picture? You must do the Hop Store in Dublin - better than Chester Beatty's.

Dear Erse, it's a pint of Johnson, but I've been known to go for a pint of plain (yer only man) on a hot day.

I take it you#re still on your old hotmail?

In my childhood town there was, and maybe still is, a Cider Bar. The town is Newton Abbot in Devonshire. It is singularly unattractive (the town, the Cider Bar was/is merely revolting). Behind the bar of this 'pub' were three barrels, each the size of an Austin Mini Minor. Left to right, each was identified with a chalked "Dry', 'Medium' and 'Sweet". Often spelt incorrectly. It's where everything started to go wrong.

Cider really is the booze equivalent of a pipefull of neat perique, Ron. Good on you!