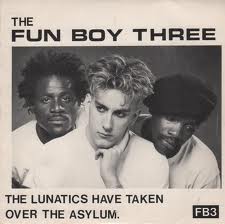 I hear Mr. Hall will be mooting the idea of 'The Nine o'clock Flooze', presented by members of erstwhile Funboy Three collaborators Bananarama. And 'Castles In The Air' will be a fun documentary series following a group of anarchists armed with several hundred pounds of explosives as they tour the aristocratic homesteads of Britain.

At risk of annoying absolutely everyone, Programme #1 could be broadened out a bit, with other nearby tables hosting members of Lehi and all East Europeans maintaining that compulsary goose-stepping would be a small price to pay for having the roads properly asphalted and the trains running on time.

On the same (very tired) theme, the new DG's name could be regularly pronounced by a newsreader with a stammer: "Lord haw-haw-Hall today announced that...."

Castles is the Air is just what we need to counter all this Downtown Abbey bollocks. Ignatz Mouse will present, Chumbawumba will do the sounds.

You, Gadjo, have struck an ever-echoing chord with your Haw Haw idea. As for having terrorists round for dinner, that's an idea BBC producers have been mooting for a long time. Right type of terrorist, of course.

I thought - for one almost nostalgic moment until I remembered he was dead - that you were referring to Terry Hall of hand up the puppet Lenny The Lion fame. Which conjured up a stream of cheap South African chardonnay-fuelled images and dialogue that is too complicated to explain at the moment but has given me much pleasure on a slow night. Plus watching Lord Patten recently during the ongoing scandals and being of a certain age, the name Haw Haw came to mind. 'Sinecure Calling, Sinecure Calling' or some such...

Returning to absurdity (it's a slow night) I just googled old Terry - singer not vent - and found this priceless entry from 2003:

'In 2003, Hall collaborated with Mushtaq of Fun-Da-Mental on the album The Hour of Two Lights which contains contributions from Blur's Damon Albarn, a twelve-year-old Lebanese girl singer, a blind Algerian rapper, a Syrian flautist, Hebrew vocalists and a group of Polish gypsies.'

Just needed Lenny the Lion to flesh out the backline...

"The Hour of Two Lights" ought to have been awful, and it was when Terry wasn't singing. The Socialist Worker liked it.

It's hard not to like a man who introduced his own delicate "Thinking of You" as "Have a Shit".

Boyo is it true that you write your posts in Serbian and then hit them with Google Translate? I ask because I see no other way of achieving your weird typesetting effects.

Thanks for sharing very good thought "Thinking of you". Currently I am using text random people for chatting. Very easy to use.

I am really enjoying reading your well written articles. It looks like you spend a lot of effort and time on your blog. I have bookmarked it and I am looking forward to reading new articles. Keep up the good work.
One Machine Learning
One data science
Bissi.Global

Get the latest Tamil Movies On Tamilmv for free online