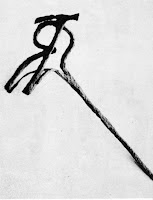 In which I attack the Secret Police with my lunch

A secretary brought in plates of papanasz and glasses of afinata, all embossed with the NAKRO crest - a fist clenched around a hank of hair, punching through a top hat.

Colonel Nadroth was a long, knobbly man armed with a blood-clotting mustache that made him look like the sceptre of St Hryhor the Becalmed.

"Well, this is cosy, isn't it?" he remarked. "Here we are, a shield and a sword of the revolution respectively, eating papanasz and drinking afinata with you, a shock-worker in the salt-mines of meaning. In some ways, this is a model of what Comrade Yutz had in mind in his speech at the disbanding of the Academy of Sciences in 1949.

"And yet, this comradely spirit could so easily be dissipated by, say, some misplaced familiarity, a lack of awareness of forthcoming Central Committee decrees, or inappropriate enquiries about the current location of one's relatives. And then - lo! - Agent (Class II) Tschjetz is giving a practical demonstration of Newton's First Law down the back staircase. Please bear this in mind, Citizen Zhatko."

(- "Who is this Comrade Newton, the new minister of justice? And what is his law? What am I doing here? Is this afinata from La Roata's? It's very good. My legs aren't right" - These were some of the thoughts that passed through my mind as I tried to work out how I had got from Tschetjetz's car into the colonel's office, and where my trousers had gone.)

"The question today," he continued "Is one raised by Comrade First (General-)Secretary Novak K. at next month's inner-Party plenum. I quote; 'The elder-fraternal Soviet Union has Academician Sakharov, an eminent nuclear physicist. Czecho and Slovakia share Vaclav Havel, the oblique playwright. Even the Poles have attics full of cuckcolds churning out mimeographed clerical nonsense while their hatchet-faced wives practice French inhalation at various film festivals. And what do we have? The trainee philosopher Zhatko, and the one they call Kodoba.

"'Have any of you read Zhatko? Has anyone? Here is the poem he wrote to mark the 34th anniversary of the 1947 All-Ruthenia Referendum to Abolish Elections. It is called "The Apocalytic Vision of the Father". I could go on. (Calls expected from the audience: Please Do Not, Comrade First (General-)Secretary!).

"As for the one they call Kodoba, his tirades against the 'rotten rootless cosmopolitan liberal rot of consenualisticism' are no more interesting now that he's an ultra-nationalist than they were when he worked for our own Ministry of Propaganda and Adult Education.

"'in short, comrades, we must raise the quality, speed and service of our dissidence, enhance its accessibility to the workers, and raise its profile among the capitalists and their comprador hirelings."

Nadroth lowered the paper, and glinted bloodshot at me over its mealy brim. "You agree, of course. Any comments?"

"Bearing in mind the staircase," I ventured, "I would like to propose that I am not a dissident."

"Until this speech by Comrade First (General-)Secretary Novak, that was objectively true," said the colonel. "Now, you will have to modify your behaviour to accommodate the Party Plenum ruling. You will begin by committing an act of sabotage against Agent (Class II) Tschtjetz. Tschtjetz!"

"Hand the Accused Zhatko your chafing iron and proffer him your ears."

The contrary waters of another Danube lapped about my lungs, and I deposited a half-portion of papanasz onto the Shield of the Revolution.
Posted by No Good Boyo at 4:13 pm

Can I have the phone number of the opium den in which you set forth, please?

Young man, you ought to know that the best dens operate by word of dessicated mouth. I would mention Miss Fu Man Minh, latterly of Mandalay. Her Maison des Supplices can usually be found in Peshawar, although she summers in Ventimiglia. Good luck.

Is the nowhere in the Port Talbot region?

I ate excellent pizza in Ventimiglia several times during the spring of 1988, whilst helping to renovate a holiday house in the principality of Seborga just up the hill. I always avoided the Dancing Venus nightclub, though. Not difficult, seeing as it was closed. I always knew it was just a fake front for the United Coastal Ruthenian Dissidents.