I Was a Teenage Esperanter 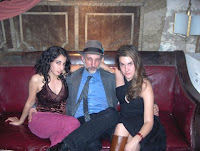 Believe me, that was not the worst of my schoolboy Esperanto poems. Another, called "La Numenio", included the horrific line:

Sweet Lethe has washed away all other traces.

Esperanters have been dragging their Frankenstein idiom around this and other web blogs ever since I made a passing reference to Incubus, the only major goat-themed film shot in something approaching that language.

If Marcel Proust managed, through bad luck and indolence, to end up in Hell, each crumb of his madeleine would dredge up memories of shambling terror such as I have endured and will now inflict upon the rest of you.

I had drowned all recollections of Esperanto through a combination of alcohol, drugs and acquiring a life. But the selective candour with which Wales commends itself to the nations demands that I retrace the steps of shame that brought me into its bucktoothed penumbra.

As a 14-year-old Welsh nationalist I had drawn the melancholy conclusion that other peoples were never going to learn my vowel-shunning native tongue, meaning that I would have to learn every other language or use English. Then my German teacher introduced me to Esperanto.

You would think that someone whose livelihood depends on persuading 1970s British youth to learn a genuine, difficult language generally associated with beastly behaviour and lumpy women would want to keep Esperanto a secret. But then my German teacher was not only Dutch, but a Quaker.

Quakers, of course, have turned lack of self-interest into a religion. The Dutch, however, are aggressive landgrabbers who conceal their plans to colonise the North Sea bed by pretending to be irritating, hash-mashed peaceniks.

If people learn German they will realise that the Hun, for all his faults, is willing to buy a round of drinks and has something approaching a national cuisine. The Dutch will then be exposed as grubby polder-dodgers and get schlepped back to the marshes from which they never fully emerged.

So Mevrouw Niederlage inducted me into the Zamenhof Cult. She herself had joined the Esperanters while being brainwashed at a volunteer work camp in Communist Czechoslovakia.

Stalin had stamped out all Esperantovian tendencies in the 1930s, understanding that the colossal struggle with the Nazis meant there was room for only one kind of internationalism. But by the 1950s the Soviets realised that feckless Western youngsters could be lulled into fellow-travelling through an appeal to their idealism and dislike of all things American - apart from the music, singers, films, actors, clothes, food and Marshall Aid.

Luckily for the cause of freedom, the Communists thought the best way of bundling bourgeois youth into Bolshevism was by sticking them in a logging camp with a bunch of thyroid-deficient Slovaks, no soap and singsongs in Esper-bloody-ranto.

The only teens who enjoyed this were Communists from the Rhondda, for whom near-starvation in the singing Tatras was like a fond memory of holidays in Snowdownia. And the Quakers, of course.

For me, as a louche Cambrian Gaullist, Esperanto appealed as an easy way to conjugate with French girls rather than their verbs. I learned it fast and convinced my Byronic self that young women swoon over speeches about the Battle of Morfa Rhuddlan, detailed accounts of my political programme and, of course, poems written just for them. In a language only Belgian peace-studies teachers can understand.

My first and last school exchange was educational in showing me that French girls liked cigarettes, singing English pop songs, discos, mopeds and non-spoddish boys several years their senior. Among their major turn-offs were all things Welsh, poetry, and total bollocks like Esperanto.

I've stuck by being Welsh over the years, and just can't shake off poetry, but Teach Yourself Esperanto went straight down the Red Cross Shop once the bus got back from Guérande.

So, if your teenage son starts saying things like "Verb declensions are pointless, but the accusative case and noun-adjective agreement are a must", this is what you do:

Slip into his bedroom when he's out, and check under the sports bag in his cupboard. There you may find grainy mimeographs adorned with Lovecraftian symbols like "Ĉ" and "ĝ" and group photographs of squirrely people in windcheaters.

Then get him laid by one of your divorced ladyfriends fast. He will thank you for it in years to come, and most likely immediately.

Can I at last be of some use to you?
Sx

Scarlet, I've a post pending on the services the older woman can perform for the good of the nation. And I don't have Edith Cavell in mind. You will serve as an example to us all.

AAAARRRRGGGHHH! Now I'm old AND ginger. It's not true, I tell you!
Sx

Boyo, Boyo, Boyo.
Once more you locate the nail, raise the ballpein hammer high above your head, and bring it down with the sort of resounding thwack that makes the artisans at Golgotha look like rank amateurs. I larfed and larfed,

Now see what you've done! Mr Chapman, of all people, is back, and with honeyed words, most of them incomprehensible. For God's sake, Boyo, don't fall into his trap: think of your younger spoddy self and the cruel laughter of the French. Think of Quakerism, anoraks, malt extract, fingerless gloves, Thermos flasks, hessian wallpaper, bad beards, Wright's cold tar soap, madrigals. Just say no.

Boyo, I feel your pain - well, some of it - but I can't help thinking that there must be a silver lining: doesn't facility with Esperanto aid comunication with Polish girls and cod-Latin speakers (e.g. biologists)?

I came here for the divorced ladyfriends and leave satisfied

I feel roughly the same about Italian as you do about esperanto. An ulterior motive in my choice of it as my degree course was the idea of a dusky Roman woman drooling as I expertly used her tongue, but in the end I just found their screechy excessiveness annoying and their language the perfect medium for talking utter bullshit. (i.e. I didn't score with any of them.)

Yeah, Boyo, and with all the good work I've put in battling Esperanto these past 48 hours, I want some sort of mention in the older woman post. I only say this because no-one apart from Maroon ever alludes to me; it's as if I don't exist. I mean, I put myself about, and what do I get? Bupkis.

I told you that going dry was Hell, didn't I Mrs. P?

Don't knock Mr Chapman! I know him and he's a good fellow.

But Esperanto suffers a huge problem generally, and that's there are a number of elderly (thankfully dying off) idealists in the movement who dreamily believe it will be the international language, foolishly ignoring the harsh realities of the world. This is what puts a lot of people off, having learned Esperanto.

Anyway, in the past I got laid thanks to using Esperanto, so I'm not knocking it, dankon!

Mr Chapman, dankon. I was very proud of the enjambement in the first line, not that it impressed Claudine and her chums.

Lordy, good to hear from you again. It's in the nature of small movements to split over maximalist and minimalist programmes, and there's something reassuring about hearing that Esperantists are still at it after all the Ido etc heresies.

You clearly benefited from Esperanto in a way that eluded me. Was she one of Gadjo's target audience of Poles and scientists?

I know one young woman who has travelled all over Europe using Esperanto, and shall recount her adventures shortly.

You have a point, MC. Are I wrote elsewhere(http://alfanalf.blogspot.
com/2008/09/actes-et-paroles.
html), there are disadvantages to learning foreign languages. Above all, you lose your exotic allure when you get caught up in mad syntax.

Mrs Pouncer, I will write about femmes d'un certain age as soon as I calm down.

Hi, just wanted to mention, I liked this article. It was funny.
Keep on posting!

Feel free to surf to my weblog :: Cheap Jerseys

Great site. A lot of helpful info here. I am sending it to a few buddies ans also sharing in delicious.
And certainly, thanks to your sweat!

Admiring the commitment you put into your website
and detailed information you present. It's great to come across a blog every once in a while that isn't the same unwanted rehashed information.
Wonderful read! I've saved your site and I'm including
your RSS feeds to my Google account.

It is perfect time to make a few plans for the future and it's time to be happy. I've
read this put up and if I could I desire to suggest you few fascinating
issues or advice. Perhaps you could write next articles regarding this article.

I want to learn more things approximately
it!

Feel free to surf to my weblog - Christian Louboutin UK

Wow, amazing blog layout! How long have you been blogging for?
you make blogging look easy. The overall look of your website is fantastic,
let alone the content!

This paragraph will assist the internet people for creating new
webpage or even a blog from start to end.

This website was... how do I say it? Relevant!! Finally I have found something that helped me.
Many thanks!

This is the most pretentious piece I've ever read. The embodiment of "purple prose".

Seriously, put down the thesaurus, take off the fedora, and stop imagining how great mulled wine must taste. For the sake of reasonable adults.

I am a teenage semi-Esperantist, and it is my favourite language. It is far better than any kind of pornography, contrary to what you say:-)

P.S. It's not 'Esperanter', it's 'Esperantist'. Be proud to be squirrely!

Again it's strange that many people who learn Esperanto, an international language, are in fact nationalists. I would think a nationalist of Wales would not support such a generalized mon-cultural language as Esperanto. It's really the fast food of languages. It's like eating a McDonald's versus somewhere local. Esperanto is faster and cheaper.