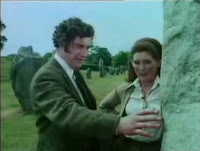 (Pointy black hat doffed to The Dog of Deceit (and Hypocrisy), who found the copy of the Camden News Journal in the Dutch Window public house and brought it to the Cymru Rouge Historical Grievances Department that I may get a better look at it.)
Posted by No Good Boyo at 11:57 pm

Another term not found in our native vernacular is consensus reality, another strange Anglo-Saxon invention of no worth to us broad-minded Cambrians.

Iolo's truth is a truth amongst many - and good enough for me..Y gwir yn erbyn y byd..

I couldn't agree more Boyo. Rather a lovely flowing white gown for the more sensitive to put on once a year than a plaid man-skirt that it's compulsory to wear at weddings. And then there's the awful example of Morris dancing to contemplate...

Got off lightly really.

I propose we turn this into a game of competitive philistinism. If the Primrose Hill mob are successful, we start campaigning to rid our pure Welsh villages and towns of memorials to culturally significant Englishfolk.

I've got my eye on a plaque to Eddie Elgar, down the road in Llangrannog, on the grounds that "came here once on holidays" is even less deserving of a memorial than "invented a whole cultural mythos".

The more I learn of Wales, the more I am impressed with my ancestors'wisdom in leaving it.

On the other hand, "from a long way away" is by far the best way of appreciating one's own culture, just as "making large parts of it up for oneself" is the best way of respecting it.

I recently bumped into an old student of mine and confessed to her frank astonishment that much of what I had taught her in "British Studies" was sort of made up, or at least presented in a more organized way than the reality would bear. Good old Iolo clearly had the same broad idea.

I lived in Indonesia, wore a panama hat and a floppy bow tie and pointed at people with my rolled umbrella. Morgannwg dressed up in a bedsheet and dealt with his inferiority complex vis-a-vis English culture by making up a better one. Can't blame a chap for that...

Highly informative, Boyo, thanks for the introduction to this chap. It seems perfrcetly reasonable to me: the Scots had Ossian and even we English had that faux Native American Grey Owl character who we celebrate now as a conservationist (and have, I learn, erected a plaque at his birthplace).

Simon, Dewi, our mercurial compatriot Aneurin Bevan once said "This is my truth, tell me yours", thereby confirming our talent for deceptively hollow aphorisms.

It's a shame he wasted his life on the NHS instead of founding an Eastern religion.

Gaw, the Druids of the Gorsedd get it right again by being happy to dress in their nain's winding sheet without expecting the rest of us to shed our traditional stone-washed jeans, loafers and lovebites.

How unlike those of our neighbours who still toy with the horrors of national costume:

The world may be a stage, but there's no need to put on a drag act.

I disagree, Nic. Rather than expunging English memorials in our slate-slick land, we ought to appropriate them. If we can claim Bach on the basis of his surname, Elgar's ass most surely can belong to us.

Wise words as ever, Gyppo. I don't think Iolo had an inferiority complex about English culture. He lived in Primrose Hill, after all. But he certainly acted as an astute salesman for Wales, as all those Welsh Americans who turn up at Cardiff Airport in truncated witches hats testify.

The late Sioba Siencyn once told me that around Llanishen it was widely believed that Marshal Timoshenko was descended from a Welshman called Timothy Jenkins.

The Marshal was from Yuzovka, a town in eastern Ukraine named after its founder, a Welsh coal magnate called John Hughes, and the legend has it that his babushka had a taste for Glamorgan sausage.

I gather that the Irish think he's actually descended from a Timothy O'Shea, but that's just silly.

Sorry NGB - but I have sent a meme your way.

Cheer up, it could have been worse...

Intriguing, Snoop. I shall consult Madame Boyo and respond.

So where are his remains then? They should be taken to Rome and hung up on a cross beside the Via Appia. I can't believe how ungrateful the Welsh are to the Romans for ridding them of the druidian yoke.

Iolo is buried in his birthplace of Flemington, but I'll pass the GPS reference on to the Holy Office of the Inquisition.

But for every bard the Senate and People of Rome crucify, we Welsh will dispatch an Italian pop singer by the antient Celtick method of scrotal inflation.

As they drift off over Cardigan Bay, we shoot them down with longbows from our coracles.

He were'nt from Hughesyoskva (my great great grandad actually moved from Abercarn to live there - gospel honest!!) - Timoshenko was from your favourite place Bessarabia...anyway forget it - there's 1.5 kilos of gold in a Brum museum that I reckon is Llywarch Hen's...we need it back.

You might also have boasted that your country stole demi-Welsh Ryan Giggs to play in its makeshift team of hoofers and hackers, depriving the best British player of the past 20 years of the chance of appearing at the World Cup. Nice one!

I believe he chose The Wales as part of a family spat. The idea that we would have been clued-up enough to sign him is absurd. There's a story that Michael Owen only qualified to play for England because his mam went into labour in the early hours, so he was delivered in Chester hospital not Wrexham. Ah, what if...

On a pedantic Ryan Giggs point he actually had no choice (thank God). He was born in Wales as was his Dad, Mam and Grandparents on both sides - at the time residency didn't come into it....zzzz

Boyo is also wrong, of course, as Unter Den Linden is a placename not a descriptive phrase, and as such does not change. But then I suspect he probably knew that.

Woah, how did I end up on this thread? Twilight Zone alert!

Mixing my adjectives with my definite articles again. I was still right though.

Mrs Boyo getting Dative on my ass - tongues will wag!

So this is what goes on among my elder threads.

Not that there's much I can do about it. Not even maître chez moi.

Digeus I recommend to use it when operational system chashes. I also use Windows Tune Up Suite. It cleans your computer from problems.