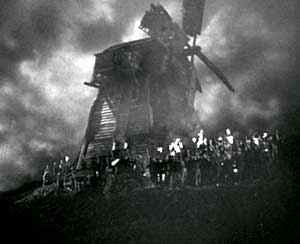 An explanation for my long silence. Not an apology, of course, as the election is over and there's no more grovelling from us, you turkey necks.
With no party enjoying anything, let alone a working majority, in the Westminster Parliament, we in the Cymru Rouge are ready to play our role.
The Liberal Democrats received fewer votes than either the Conservatives or Labour, lost several seats and came in third in terms of mandates won. If this makes them kingmakers in the pissoirs of power, then just think how greater is the right to rule of the Rouge, who received no votes at all (apart from MC Ward's postal effort, which I'm proud to say he entrusted to our Passenger Pigeon service rather than the monarchist Royal Mail).
To this end, we present Mr Cameron with our minimum programme:
1. Not a hung parliament, but a hanged parliament. He went to Eton and ought to be able to sort the strong from the weak - both verbs and honourable members.
Mass execution of the Commons would solve the electoral dilemma, provide cheap entertainment for the cowled plague victims of London Town, and focus the minds of any estate agents, duff lawyers, National Union of Students hacks or women who might have considered standing for Westminster next time.
It would also leave the House of Lords as the sole parliamentarians, thereby justifying any jacquerie the bondsmen of England might fancy. Parading a naked, dung-smeared Baroness Kinnock around Lambeth in a cage made of her husband's live bones might seem excessive, but trust a Welshman - it isn't.
Some cadres have asked how the Cymru Rouge can back hanging, as our traditional method of dispatch is the slate enema. The answer the Prif Sasiwn handed down is that we expect the Tories to make concessions, and so must be prepared to meet them halfway on tactical questions before shoving them over the abandoned pit heads of the Rhondda, again and again.
2. Edjucation. This must stop, and we know that the Conservatives agree.
The failed rice harvests that Camden trustafarians, BBC staff and George Monbiot will be busy sieving through their cheesecloth shirts (see Economic Policies and Recreation) must be stored somewhere, and schools, colleges, Kindergärten and non-Russell-Group universities would make excellent silos.
The "new universities" and the University of Wales will remain open, and all surviving academics will be accommodated therein. We expect the sherry drought, heterosexuality and encounters with the student body will take care of them within months.
3. Foreign Policy. Like the Tories, we harbour a deep scepticism about Europe.
They see little to be gained from further expansion of the European Union, consider the euro to be an unwarranted erosion of British sovereignty, and oppose the disaggregation of any more powers to Brussels.
We just don't think Europe should exist, and propose a joint invasion with Communist China. Remember, we are Maoists.
In order to win unthinking Conservative support for a Redder East, we would form an Axis of Edwardian Evil. The Chinamen could dress up like Fu Manchu (and his foxy daughter, we hope), while we will affect the tifter, knuckledusters and kerchief of the East End footpad.
Once we've partitioned the Continent into East Suffolk, Brittany and the Yáng Guǐzi Zìzhìqū Autonomous Region, we'll squeeze the Cabinet into Ulsters, Piccadilly Weepers, Prince Alberts and other late-Victorian charivari, then Nayland their Smiths with an opium pipe.
4. Financial Management. The Conservatives have made a manifesto pledge to cut the budget deficit this fiscal year, while blocking any increase in employers' National Insurance contributions.
We wish to replace the Stock Exchange with the sound of insects feeding on the corpse of Capital.
As you can imagine, this amounts to much the same thing.
So, Mr Cameron, the Cymru Rouge coal mine is open for business. Our shaft is long and dark. Our veins throb with promise. Come plunge our depths. It's time to get some closure.
I'r Gad!
Paul Pot - Brawd Rhif Un
Huw Samphan - Brawd Rhif Dau
Ta Moc Tudor - Brawd Rhif Tri
Mike Peters (out of The Alarm) - Brawd Blawd, Beiblaidd
Prif Sasiwm y Cymry Rouge.
Posted by No Good Boyo at 3:35 pm

I heard that the Pottists were teaming up with the Scottists to form a Fleece-the-English alliance. I sense that the time might be ripe to repeal the outdated anti-slavery laws.

No Good Boyo said...
This comment has been removed by the author.
10:47 pm

To continue the Fleece-the-English alliance, GB. And any sheep jokes will be dealt with in the usual manner.

With you on the anti-slavery law, but for different and eminently malign reasons.

We're hoping to sell slavery to the Liberal Democrats on the grounds that it's still common in Mauritania and therefore vibrant, diverse and respectful of other faith traditions and their hatred of human dignity.

The LibDems will, of course, be the first to learn how vibrant and diverse bondage can be. Most Tory MPs already know, and that kind of thing is wasted on the Labour plebs.

Sherry drought, heterosexuality and contact with the student body - whatever happened to loose shoes, tight pussy and a warm place to shit? Would these undermine the Grundlegendgesetz of the Cymru Rouge?

No shoes, loose stools and roast cat at Boyomass, the only permitted public holiday. That's the deal, Inky. Gesetz means nothing, Gewalt is all.

'Rice harvests'? The national dream of fast food autarky is within reach: self-sufficiency in half-and-half. Got to be worth sending a few tens of thousands to the rice paddies of Tregaron.

Some sort of elitist, possibly Masonic, electoral jiggery-pokery meant that no Cymru Rouge candidate appeared on the ballot paper handed to me at 7.50am on Thursday by a conscientous but guilty-looking hippie at Summerhill Methodist Church, St George, Bristol East. Fortunately I had brought my own crayon so I added one in, applied my cross, signature, phone number and a cock-and-balls doodle, screwed the paper up into a ball, swallowed it whole and exited politely, having done my bit.

Failed rice harvests, Gaw. That means someone will have to spoil the spud crop if we're to achieve true Silurian starvation. My blog url holds out the promise of the good life for all who remain fanatically loyal beyond death.

Brit, you did the right thing. Spectacle wearing is banned by the Rouge, so imagine what we make of apron-wearing types wielding compasses.

You are hearby appointed Commissar of the Hafren Valley Special Underdevelopment Zone. Henffych!

Update: the Tories think they can work with most of our programme, but aren't sure about where to get the rope from.

Honoured. I'll dig out my knuckledusters, it's been too long.

Remember, Brit, we only condone violence against our enemies.

Well, it seems as good as anything else currently on offer. On behalf of Lincolnshire, I would like to invite the Sino-Cymru Maoist Alliance to occupy our potato fields. Though you'll probably want to leave again within 24 hours.

I feel the only thing missing here is a 5-year plan. Here in Ceauşescu land we have the slogan "Five years? Let's do it in 4 1/2 - hurrah!!" I envisage the Rouge going one better and fulfilling all their election promises in 5 weeks using careful use of statistics and (English) forced labour. Oh, and why not call the rest of the Continental landmass "The Europe" - that always helps diminish things in the people's eyes.

We are happy to occupy Lindsey and Holland out of Lincs, Pop. Lindsey sounds like the sort of girl who gets popular the risky way, and Holland showed decisiveness in taking one of the names the Dutch clearly don't need anymore.

But wouldn't touch Kesteven with yours.

"The Europe" might not work, Gadj. After all, we all love Madness, even though they renamed themselves "The Madness". Let the Tories worry about "The Continent" with its horse-eating bad drivers and their experienced teenage nieces, we have worlds to win.

The Welsh space programme is one of our next demands to Mr Cameron, especially as the Lib Dems seem to have left him and his shiny-faced chums crying in the vestry.

With common sense policies like these, it's only a matter of time.

No Good Boyo said...
This comment has been removed by the author.
11:30 am