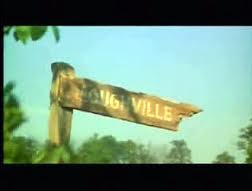 Blaenau-Ffycin-Ffestiniog - where the banjo players of Prydain are exiled and mercifully never heard from again, until a sadistic ex-pat boyo posts a ewe-tiwb on the interwebs.

To be ffycin fair that clip's in Llanfrothen, the hometown of our woodwork master Broth (not his real name). He accused children of smelling of jelly babies, laughed at the senile, made harps for the Eisteddfod, and hit my father in the forehead with a blackboard duster from the back of the workship via a ricochet off the blackboard itself. My dad was only there for the parent-teachers evening. They did expel the vicar too, although the world is not yet ready for the details.

Blaenau, of course, is much less polished.

Blaenau-Ffycin-Ffestiniog - where the banjo players of Prydain are exiled and mercifully never heard from again, until a sadistic ex-pat boyo posts a ewe-tiwb on the interwebs

I rather like their fancy pickings. Having six fingers per hand helps, though but.

No-one claps afterwards! The area's stranger than even you make it sound.

Love the clip of Welsh blatnyak. The cimbalom is surely a Welsh instrument - originally made of slate, like a snooker table, and strung with the vocal cords of Snowdonia incomers who still haven't mastered 'the consonants'.

Like all Welsh musical instruments, Gadjo, the cimbalom was originally a cooking uptensil, designed for harrowing parsnips. On Anglesey they can both play and harrow. It's their special feet, see.

I've mentioned this before and shall now do so again - four or five generations back my Snowdonian direct ancestors contemplated the rain, the mist, the cold water lapping about their ankles, the slate quarrying, the inevitability of seaweed for tea and a sermon about hellfire at chapel next Sunday and promptly bwggered off to the West Midlands, along with thousands more from across the Principality. Observe the prevalence of Welsh names in the Birmingham and Black Country phone book (or the Manchester and Liverpool equivalents, for that matter), and then contemplate that these are the descendants of those bright enough to get out, leaving only the cripples, the idiots, the hardcore nationalists, the ones who had previously *been* to Birmingham and the Methodist ministers behind.

Before my sister emigrated to US we had a smashing hoiday in Dollgellau staying in a hotel with a lake. Beautiful, great food but freezing cold.
Mine host - Peter - was a scream and we stayed up all hours listening to his wild tales.
Sadly Peter may be long gone - it was the sixties - but I wonder if the hotel is still there?

Dear Pat, the Gwernan Lake Hotel is still there. Pete is gone, but the current owners are great and the restaurant is now superb. Get in!

As for you, Gyppo, bear in mind that when we sodden nationalists eventually take total and utter power in Wales, our first treaty with England will be a population swap - we will expel all the Brummie white-flighters and Council Scousers, while Kim Jong-style pressganging the descendants of those who fled our glorious homeland. Welcome to the Martyr Cerys Matthews Memorial Baldderwrack Sorting Plant, Citizen Jones.