Watch With Boyo I 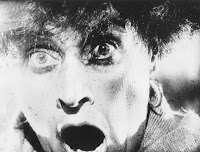 Compiling lists is a male activity, except for the shopping list I artfully doctor once a week, so it's no coincidence that champion web blogger and future President of Wales Ordovicius is a man.

He has tagged me and four other slackers with assembling a 12-night Hefneresque film fest. Feeling like a London Underground train, I've nonetheless come up with a festering fortnight of film with a two-day break to buy pies, beer and visit your loved ones.

Reading back through my cinelogue I was struck by how much I like black and white stuff, creepy or otherwise. I put this down to my Welshness - Wales is a country that went colour only in 1982 and still runs a Best Kept Graveyard competition.

I'll account for the films four at a time, so as not to take up too much room. As Tom Verlaine sang: "l'étreinte jalouse et le spasme obsesseur/Ne valent pas un long baiser, même qui mente!"

One for the ladies. The lesbian-vampire genre is much-maligned by bitter blondes, but this one might just convert them. It should also extend my kink-based visitor profile in an agreeable new direction. It does for Belgian coastal resorts out of season what MR James did for Suffolk.

Key quotation: "You should have seen him in Bruges. He looked so fascinated by death".

Up there with The Third Man and all of the Powell and Pressburger oeuvre at the British film-making dockyard in the 1940s, Dead of Night launched the portmanteau horror film genre that bobbed around bravely in the choppy waters of Lake Amicus before sinking with all hands. It is, as top Welsh actor Mervyn Johns says, "A nightmare of horror", and everyone smokes and drinks the whole time. Excellent.

No clips available anywhere, so here's a still from the best segment - The Mirror. The moment when Googie Withers sees the other room in the glass still has the power to shock.

Give a young British director a grant these days and you'll get another retread of Guy Ritchie's It's A Right Royal Cockney Barrel of Monkeys. Schoolboys Kevin Brownlow, Andrew Mollo and their chums had 3/6d and some old Kubrick film stock, and they produced the true story of the Nazi occupation of England.

Even the amateurish acting gives it the authentic feel of a wartime documentary. The clip of real British fascist Colin Jordan in uniform having a cosy chat about whether to send the Jews to Madagascar may remind you of the readers' views on the Guardian's Comment Is Free site, but the rest of this unheroic and unsettling film is not like anything you've seen before.

Again, no video clips, but here's a cheery pic. 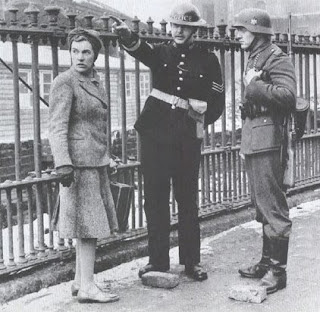 Key quotation: (The Doctor): "The appalling thing about fascism is that you've got to use fascist methods to get rid of it."

To change the mood a little, here a film that pulls US fratboy comedies inside out like the baboon in Cronenberg's "The Fly". More than a series of excellent set pieces, it has a number of pleasing story arcs. It also has Mrs Wormer, whom I still fancy, and Bluto's "What's all this sitting around shit?" speech - which ought to be taught somewhere.

On a personal note, vacuum perversion sleuth Andy Wislen studied at the University of Oregon, where it was filmed, and a friend of mine called Elizabeth is the girl walking past the library in the opening sequence.

Key quotation: "You fucked up - you trusted us!"

Keep watching the screens.
Posted by No Good Boyo at 9:14 pm

A faultless selection for the arthouse aficionado, but those of a more populist bent would have included The Rollicking Adventures of Eliza Fraser in the programme. You don't often see Trevor Howard play a gay. I'm amazed to have discovered that Googie Withers is still alive.

Sounds good, Boyo, and anything up there with The Third Man gets my vote. I hope I get to see them some time, though I reckon I'd have my work cut out recommending a film season of black-and-white British films to the local cinema here.

I'm sure they'll roll their eyes at the number of vampire films too, Gadjo.

Diolch Ordo, I'll be posting the next batch tonight I hope (the joys of night shifts).

GB, you've reminded of a fine film that, on reflection, I ought to have addded - Sir Henry at Rawlinson End. Trevor Howard blacked up in a tutu, on a unicycle. Gave me my personal motto:

"If I had all the money I've spent on drink, I'd spend it on drink".

Interesting choices. Can empathise with your reasonaing, I went to the pictures with friends a while back. They were a bit concerned: "are you OK with this? It's in colour." It was 'The Sweet Smell of Success.'

Horror films are best in black & white: you've already lost half of your visual frames of reference so your nerves are a bit twitchy before anything untoward happens. I'd be inclined to add "M" or one of the early films in the Dr. Mabuse canon.

Bingo Kevin! The Second Mabuse is on my list, coming shortly.

Very perceptive about the loss of frames of reference. I'll come back to that later.

Ah, this gets even better: Sir Henry at Rawlinson End and revelation of Kevin's coneisseurship (spelling? Sorry, I can't arsed.) While we're talking German B & W, I'd add Fritz Lang's Metropolis and Pabst's Diary of a Lost Girl.

Indeed, Boyo, Romanians would not understand why anyone would dress up their national hero like a camp Hungarian aristocrat.

The "camp" in that last sentence was redundant, Gadjo. As Daughters of Darkness suggests, I like my Hungarian aristos the way I like my women - female.