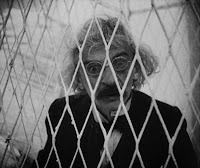 Fifth Night: Seven Days in May

Shakespeare was a bald-headed Brummie, but if he had been alive and employed as John Frankenheimer's scriptwriter in the 1960s, he would have given us this film. A troubled king of a divided his realm, a military leader scheming in the wings, an officer torn by loyalties, a woman ill-used, a Southern Falstaff, and meaty speeches about stuff that matters - it's all here in the best political thriller ever.

Less pantomime that the Manchurian Candidate and years ahead of the paranoid wave of the early 70s, Seven Days in May gives us some of the hottest Burt-on-Kirk action ever filmed. Plus Ava Gardner. Not much of it on the Intern Net, but here's a slice:

Key quotation: Col Casey: "Yes, I know who Judas was. He was a man I worked for and admired until he disgraced the four stars on his uniform."

The perfect adaptation of the perfect novella, Jack Clayton's version of "The Turn of the Screw" lines up Truman Capote on script and Freddie Francis on cameras in a masterpiece of creepy ambiguity. The corruption of children is handled with emotional economy, as are the shocks. Miss Jessel seems to seep into your vision when she appears to the governess across the lake. And Jason King is Peter Quint! Rather.

Key quotation: Flora: "Can tortoises swim?"
Governess: "No, they cannot."
Flora: (removing tortoise from lake) "I thought not."

The closest thing British men have to a religion, with its script a liturgy and its protagonists saints fit for emulation. It was almost worth having to put up with the Beatles just so George Harrison had enough money to produce this slice of modern Chaucer.

Is it about friendship, love, growing-up, drinking, farmers? The K Man knows Ralph Brown - he who played Danny the drug dealer - and says it's about acting. Enjoy it before students on the Oxford train quote it to death. My favourite scene is the night at the country pub, about 1'25" into this clip:

Carl Dreyer is largely to blame for the French making films like Last Year in Marienbad, and this earliest bid in the lesbian-vampire stakes (it's meant to be based on Le Fanu's Carmilla) is where it all began. Sets bathed in light to disorient the viewer. Characters who enter frames out of the corner of your eye. Multiple points of view. Shadows have lives of their own.

There's little dialogue, no lesbian action and very little vampirism. Dreyer set out to create a sense of dread and decay, and he succeeded. Relish this exquisite corpse:

Alas, that may have been Jason King's only big screen credit. And it all came to grief when he was later convicted of "gross indecency" with a truck driver. Not very enlightened times, Mr Boyo, in spite of all the classic movies.

The words, "Lesbian Vampire" pretty much guarantee a rental from me at some point -- most probably when the wife and kids are at church or something.

'The Innocents' and 'Vampyr' - you're definitely keeping this interesting!

Thanks Kevin, Vampyr is the film that I think bears out what you said about black and white confusing our perceptions even further.

GB, Mr Wyngarde starred in one excellent 60s horror film, Night of the Eagle. He gives a strong performance in a film that's only let down slightly by crude special effects towards the end - rather like Tourneur's Night of the Demon:

Mr Sherman, if I can broaden the circle of admirers for the sapphic revenant genre I know I've not lived in vain. Praise!

So far, I've seen one of these films. I believe. I may have seen more, but I have total amnesia after most films and don't remember anything about them minutes after they finish. Probably explains a lot. I've heard Keith Richards exhibits similar tendencies.

MC, that means you have the treat of watching each film anew. Rather like a goldfish, but one who has a telly.

Like MC I am woefully uneducated/amnesiac in these matters and have only seen Withnail. Having lived in Denmark I really should have seen some Dreyer, but I haven't. Though I do seem to remember an interesting film called Häxan ("The Witch").

Häxan is a wonderful film, though not by Dreyer. Avoid the "Witchcraft Through the Ages" version, which is truncated and has some trippy nonsense by Burroughs (William S. not the might Edgar Rice) overlaid.

"Top Ten Bald Brummies". Now there's an idea for a posting. I shall get cracking on it...